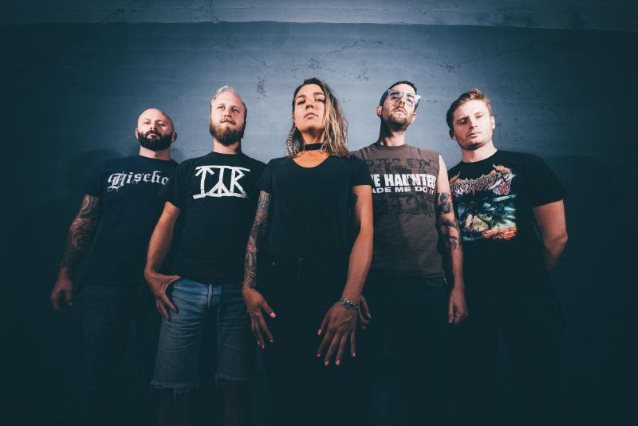 San Francisco-based band LIGHT THIS CITY has reunited to record its first new album in a decade.

The group will enter Castle Ultimate Studios with Zack Ohren in December to record its fifth full-length LP.

Vocalist Laura Nichol states: "Performing and writing with LIGHT THIS CITY has never stopped being fun. Now that I have the perspective from a guitarist/vocalist standpoint, I love to be able to switch it up and engage an audience with the freedom of only my voice, words, and a microphone in my hand.

"The personality that LIGHT THIS CITY's music and influences draw out of me is something that I really enjoy exploring and embodying. While HEARTSOUNDS feels like an exhilarating challenge every time I step onstage, when I'm in front of an audience with LIGHT THIS CITY, I always feel at home. I don't know if I could have both of those feelings with one band, but luckily, I have two to round it out!"

Drummer Ben Murray explains: "I think I can speak for all five of us when I say that we couldn't me more excited to resurrect LIGHT THIS CITY, finish this upcoming fifth album of ours, and get back out there to shred some new and old songs for all ya' headbangers out there! We are eight tracks into this record and it tops anything we've ever released, by far. Thank you for waiting ten years; we'll see you all soon!"

Murray's own Creator-Destructor Records will release the album in March 2018.

LIGHT THIS CITY began in 2002 when best friends, Laura Nichol and Ben Murray, decided to start a melodic death metal project in the vein of AT THE GATES, CARCASS, IN FLAMES, and the other Scandinavian bands that inspired them to play fast, melodic, crushing music, largely untouched by the American population of metalcore, deathcore, and numerous other subgenres of heavy metal that were ignoring the monstrous influences of the '90s. After the sparks were lit, the two soon wrote their debut 2003 full-length, "The Hero Cycle", which quickly landed them a deal with Prosthetic Records, who would go on to release the band's following three albums.

As Murray and Nichol neared the end of high-school, LIGHT THIS CITY released 2005's "Remains Of The Gods", which sparked the rest of LIGHT THIS CITY's trajectory on Prosthetic, and saw the band touring heavily in support of their Bay Area brand of melodic-death metal infused thrash. "Remains Of The Gods" gained favorable reviews and it seemed as if the metal press knew what was in store for the band.

LIGHT THIS CITY released its 2006 follow-up, "Facing The Thousand", undeniably their most popular album. By 2006, Nichol and Murray were out of high school, on the road full-time, with a full band in tow, with Steve Hoffman on guitar, Ryan "Hollywood" Hansen on lead guitar, and Jon Frost on bass. "Facing The Thousand" saw the band on the road in support of a multitude of metal acts such as DEATH ANGEL, VADER, MALEVOLENT CREATION, EDGUY, INTO ETERNITY, ALL THAT REMAINS, CHIMAIRA, SOILENT GREEN, DARKEST HOUR, SUICIDE SILENCE, MISERY SIGNALS, and many more, gaining the band a rapid exposure into the metal mainstream.

After a three-year touring cycle on "Facing The Thousand", the band retreated to Oakland to record its fourth album, "Stormchaser", which saw a guest vocal appearance by Chuck Billy of TESTAMENT. Before the official release of the album, LIGHT THIS CITY disbanded before even having the chance to tour on their fourth and final effort.

In 2010, LIGHT THIS CITY played five final shows, the short tour titled "The Final Thrash Attack", in which the band could celebrate the songs of "Stormchaser", and give the fans a bit of closure that they never received with the band's sudden disappearance. In September of 2015, DARKEST HOUR requested that LIGHT THIS CITY play the San Francisco date of their twentieth-anniversary tour. The band quickly reunited within a few months to rehearse one final set that would celebrate the band's four-album career. The show was absolutely one for the books, sparking the flame which lead the band to reunite.