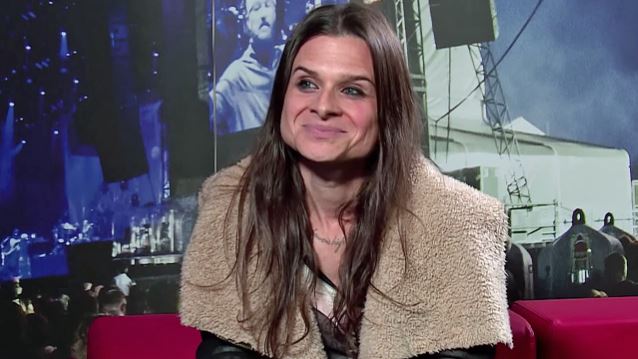 LIFE OF AGONY lead singer Mina Caputo (formerly known as Keith Caputo), who came out as transgender in 2011, was interviewed at last month's Graspop Metal Meeting in Dessel, Belgium. You can now watch the chat below. A couple of excerpts follow (transcribed by BLABBERMOUTH.NET).

On LIFE OF AGONY's renewed energy on stage:

"I think there's a new, fresh excitement with all of us. I think the fact that I came out and there's no more secrets… and there's a lot less tension between everybody… You know, when you spend so much time with people, it's a family, and you're bound to hit a wall once in a while. But as far as musically, we're having a great time, and that's what you're probably hearing."

On whether Caputo's decision to come out as transgender really had such a significant impact on the band's interpersonal relationships:

"I think so. I think so… 'Cause, you know, I think when you put a bunch of boys in a room together… I think boys in general, men in general, have a difficult time expressing their emotions and their feelings, so you're always hitting a wall with one another. And I think I eased a lot of that, because now there's a little lady in the band, and everyone is on their best behavior and everyone's just really sweet."

On how LIFE OF AGONY's live performances are still as powerful as ever:

"Well, here's the deal: when I get up there, it's, like, the body doesn't matter… It's all about the soul. When I'm up there, my spirit transcends. It's not about how I was born, where I'm evolving into… You know, music has that power to transcend all kinds of limitations of how human beings experience. That's why music is so special to so many people — because it allows your heart to open up. You become more of a compassionate being, you become more open… you heal. I think there's a lot of wounded people in the world because of everything that's going on today… Politically, all the leaders… I don't have to explain how fucked up corporations are making the world, how they're compressing humanity. There's a lot of pressure, there's a lot of tension. So I think music is a great escape; it's the best escape. It's better than drugs, it's better than sex… well, not really better than sex, but, you know…. You know what I'm saying."

On whether there are any plans for LIFE OF AGONY to release new music:

"It's a secret. You know… We can't predict the unseen. We have spoken about some stuff. We're shooting around some ideas, but [there's] nothing solid at the moment. But we may pop out with a song or two. We're not one hundred percent sure. We're having a great time. [There's] no pressure. We're getting offers from so many different kinds of companies and labels that just wanna throw money at us. But we're just, like… We don't even know if we wanna be with a label. We're tired of it. We make our money. We do all of these big shows in between the festivals. We're selling out. We don't need tour support. We don't need anybody. We've established this cult... you know, for so many years. I mean, the cult is now even getting bigger and bigger and bigger. It's, like, I give so many people so many reasons to hate me, and they just love me even more. And it's just, like, 'Wow! Holy fuck!' I feel so grateful. I'm learning so much about people and the world, and how the media paints a different picture about… My point is there's so much love out in the world, and the media just tells you otherwise, because that's how they sell their product, that's how they get viewers, 'cause that's how people get sucked into, like, CNN or Fox News and all of these bullshit American news stations, like Fox and CBS and this and that. All they do is focus on horrible, horrible news when there's much beauty in the world. There's so much love. There's so much compassion. And those are the things that you have to focus on."

One of LIFE OF AGONY's first shows since Caputo came out as transgender took place at last year's edition of Belgium's Alcatraz Metal Festival. The famed "River Runs Red" lineup, rounded out by guitarist Joseph Zampella (a.k.a. Joey Z), bassist Alan Robert and drummer Sal Abruscato, took the stage together once again after a three-year hiatus.

LIFE OF AGONY played sporadic shows over the course of the six years after completing its successful touring cycle for the 2005 Epic Records release, "Broken Valley".

On April 3, 2010, I Scream Records recorded and filmed LIFE OF AGONY's performance at the Ancienne Belgique in Brussels, Belgium, the second show of the band's European "20 Years Strong" tour. The "20 Years Strong - River Runs Red: Live In Brussels" live album — which is a digipak combo release containing a CD of the entire concert as well as a DVD with a 10-camera production of the show, an on-the-road documentary and much more — was released in July 2010.