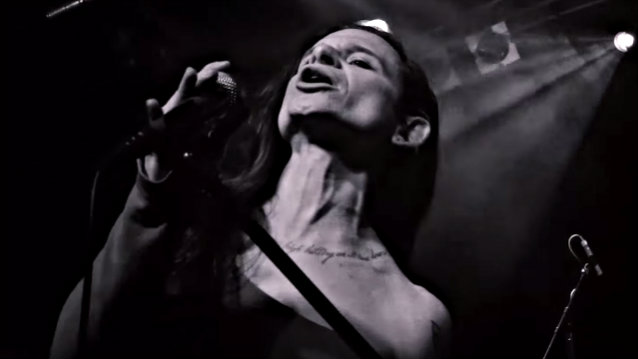 LIFE OF AGONY singer Mina Caputo (formerly known as Keith Caputo), who came out as transgender in 2011, says that she is the "right person" to front STONE TEMPLE PILOTS following the death of the latter band's original vocalist, Scott Weiland, and the departure of Weiland's replacement, LINKIN PARK's Chester Bennington.

Bennington joined STP in May 2013 after the famed alt-rock group fired Weiland, who helped found the band in 1985. Chester and STP released the five-song "High Rise" EP in October of that year. It included the singles "Out Of Time" and "Black Heart".

Two months after Weiland's December 2015 death, and three months after Bennington ended his two-year tenure with STP, the remaining members announced they would hold auditions to fill the role of STONE TEMPLE PILOTS singer. The band has not announced who will be joining the group as their new vocalist.

Asked by Alternative Nation if she would like to be the new singer of STONE TEMPLE PILOTS, Mina said: "Absolutely. I feel like I know the DeLeo brothers and Eric Kretz. But I'm much more closer to rock 'n' roll than a lot of people — I was born with a LED ZEPPELIN record in my hand, y'know? And that being said, the STONE TEMPLE PILOTS — to me — have always been like the modern-day LED ZEPPELIN. And I really always felt like I understood Scott's melodic sensibility. I always understood his masculine/femininity. I just feel like it's so meant to be. I feel like I'm the right person for the right equation, because not only would I do my damndest to honor the STONE TEMPLE PILOTS catalog — which is extremely Biblical to me — but more so than ever, I would love, love, love to create new music with the STONE TEMPLE PILOTS. With the DeLeo brothers. They are pretty much my top favorite of all musicians of all time. And I just feel like lyrically, melodically, the shit I've been through, that I would be able to deliver really."

He continued: "I honestly don't think they really know the true essence and limitlessness of who I am as an individual, or a vocalist, or a front person. I think the only really good way for them to judge would be to actually get me in the room with them, or doing something new with them — to show them. Because I definitely have the sensibility. I know what they're looking for. I know what they want. I've watched many, many interviews with Dean and Robert, talking about kind of singer they want. And I'm the person. I know I am. And I know as far as loyalty… and if they wanted to do a lounge version of 'Plush', or a bossa nova version of 'Big Bang Baby', or a Spanish version of 'Where The River Goes' or 'Trippin' On A Hole In A Paper Heart', I know they're looking for that singer that if they present like a jazz version of, let's just say, 'Dead & Bloated', they need a vocalist that can 'chameleon' their way vocally, lyrically, melodically into a new song or this already-existing song that they would want to do, and make it into this different kind of version. Because that's the kind of band that they are — they have no limits. And the songwriting ability, they're some of my favorite songwriters. Robert DeLeo is one of my favorite bass players, one of my favorite songwriters. Only because I know what I would put into that project too, and I know my own personal love of music and what music means to me, and what the STONE TEMPLE PILOTS music means to me. Everything that they were and everything that they contributed to rock 'n' roll… I would lose my mind if I got a call to just be like, 'Hey, come on and come down. Maybe we'll jam on something new.'"

Mina added: "I think a lot of great people might be getting lost with the way that they're doing it. Because I haven't heard anything about anything — since they put that whole thing up. And I actually went that route. Just because I'm in the business or didn't think I should get any kind of special treatment because I'm in somewhat of a successful act or whatever, I went through the rings like everybody else, and then I didn't hear anything. I spoke to Eric a year ago, and I haven't really spoken to Eric since. God knows what they were going through — or went through.

"Scott… we can never use that word 'replace,' because nobody ever, ever, ever could replace that man. And if I ever did get the gig, even if it was for one night and they did a special event with all different singers and I was singing one song, you can never replace Scott Weiland. That's not the idea of it. It's just honoring Scott's energy, it's honoring Scott's contribution to rock 'n' roll and creativity itself. I just feel like because I've been listening to them my entire life, and I know their catalog inside and out, I know even the way Scott shaped his lips to sing. I'm a singer. I grew up singing classical music, doing classical training. I understand — I can hear the vibrations coming out of his mouth. So I feel like I would be pretty, pretty, pretty good.

"I think I would blow their minds — just like when I auditioned for THE DOORS. I blew their minds — Ray Manzarek stepped on his piano and was, like, 'Oh my God! Robby, do you hear this kid's baritone?' That's how that audition started — I kid you not. I was working on 'A Fondness For Hometown Scars' in L.A. — a solo effort in 2007. Around that time, that is when Ian [Astbury] left THE DOORS, and they were looking for a new singer. And I auditioned. Management loved me, the band loved me… but it's very political. And the manager was also managing the dude from FUEL [Brett Scallions] who eventually got the gig. And I had my manager at the time talking to them, 'If you love him' — Keith at the time — 'give him the fucking gig! You're going to give it to someone just because you're…' and I also understand that, it's a very political process, this business. And also, with Chester too — loved Chester, loved what he did for the PILOTS. But quite honestly, I think I could do a far better job of giving blood and guts, and that street, guttural wisdom. I loved what Chester did, but I believe in myself way more. Nothing against Chester, because I love him and I love LINKIN PARK. But if you don't believe in yourself more than anybody else, what's the point in doing what you've got to do? I'm not coming from a presumptuous corner, because that's not me at all. I'm just very secure and very confident in my abilities, and I know when I touch them right. I feel I'm a very underrated, very under-the-radar kind of vocalist. Almost as if people can't handle the light that comes from me, so they keep me under. And I felt like this business has been doing that to me for most of my career."