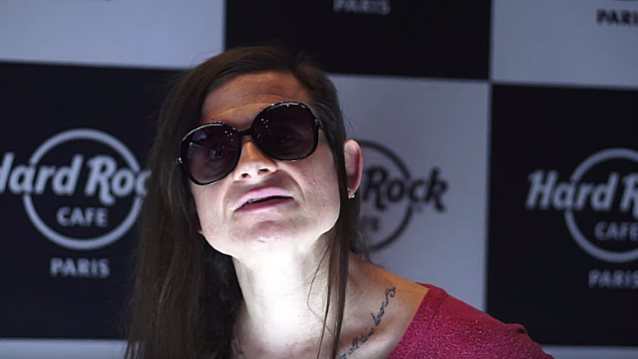 On the motivation behind LIFE OF AGONY's new "A Place Where There's No More Pain" album:

Mina: "We were offered a couple of labels, offered some really good deals. We weren't really looking to make a record, not right now anyway. We were just enjoying being out there in the world and catching up on a lot of lost time that we missed with one another. I had been through some changes the past ten years; all the boys had children. We do all different kind of creative things. Alan [Robert, bass] has his coloring books that are on top of the world right now. His comic books, I'm doing my solo music and different musical projects. We were all doing live gigs. We really enjoyed this time around, the past few years, having a great time, a lot of fun. We fired many people, we keep it really small now, just really close with the band. We got some offers and when we started getting some offers, we started kicking around some ideas and one thing led to another, a year and change later, 'A Place Where There's No More Pain' was born.

"I think the motivation, really, was to make up for lost time. I could say that personally, for me, it was the album to make amends with my brothers, with my family, for all the trouble I've caused them throughout all the years. [Laughs] For me, that's the heart of it. Plus, I love the band, I love the songs that they write, I love singing for them and being with them. They're my biggest allies and my biggest friends. We're enjoying each other's company more than we ever have in our lives, so why not take advantage of really good times while it lasts? Because life is fleeting; life goes by so quick."

On how it felt being back in the studio with LIFE OF AGONY:

Mina: "It felt great. I had the best time, the most creative time laying down vocals and melodies than I ever have for this band. This was the fiercest I've ever been. The most deliberate. [I] had an amazing, amazing time creating and helping to bring the songs to the point where they needed to be. That's my life. That's my passion. I'd rather stay in a studio, in a recording studio, than anything else. If I didn't have to go out on the road to take care of my family and my dog, I'd probably stay in the studio making records every year. That's where my true passion is. It's in the studio, it's being a doctor, it's giving birth to songs and melody and lyric that becomes soundtracks to people's lives. I love the studio. The studio is sometimes better than sex for me."

On whether she feels better than ever after coming out as transgender in 2011:

Mina: "Absolutely. I'm living my life the way I always intended it to be, but didn't have the strength or the courage to let the lady out. Now that I have and I'm transitioning almost ten years now, I became an old lady real fast. [Laughs] It's a cruel world. I'm not going to let the cruel world stop me from being me. I don't give a fuck who likes it, who doesn't, I'm not here to please people. If you don't understand, then fuck off. I don't care if you don't like people like me or whatever, you don't understand it because you can't look deeply within your own self. Those are usually the people that dislike people that follow their dreams. I'm just going after my dreams. One dream after the other, I'm living it. That's the purpose of my life. I live my dreams and one of my dreams was to honor the feminine. I'm just a woman born without a uterus. I don't have the tools. I don't have the physical 'down there' to give birth, that's all. I'm no different than any other girl on the street. In my personal view, if you really knew who I was intimately, I think people would say the same."

On how long ago she started feeling like a girl:

Mina: "Since I was six, seven years-old, maybe. I always knew. I was just afraid. I grew up in the '70s and the '80s, so back then, it was very, very different than it is now. That's part of the point. I'm not like everybody. The more you walk into your fear, the easier life becomes because then you realize fear doesn't even exist. It's a charade, it's a game. The institutions play with us, all the institutions set into place for humanity creates fear and that's why they got everybody running around like sheep and slaves because everyone is afraid. I'm not afraid anymore. I don't give a fuck. I don't care what you think, what you say, just don't touch me because then I'll get Brooklyn on you and I might have to, I don't know, stab you in the fucking neck because if someone tries to harm my life, I'm going to do whatever I have to do to protect my life, or protect one of my friends. I'm still an angry, violent person. I'm fucking very angry. From society. 'You can be yourself, but not like that!' That's society. Very hypocritical, very fear-based and very counterproductive. The institutions set into place for humanity, the school system, the healthcare system, the food systems, the political systems, they should all be ashamed of themselves. They all should be ashamed of themselves. They're all big fuck-ups. It's fucking humanity, man. Humanity's taking some weird fucking turn. But I don't know if that's the way it's supposed to be. Are we supposed to destroy ourselves? I don't know. No one knows nothing. I don't care who you are. You're the fucking pope or [British physicist] Stephen Hawking, no one knows shit. No one knows the origin of life. No one knows why we're here, but you need to create why you're here. We're here to have fun, to feel good, we're here to give each other unconditional love and encouragement, we're here to protect one another. But the way the institutions are, unfortunately, they don't teach that."

"A Place Where There's No More Pain" will be released on April 28 via Napalm.