Christian rockers LIBERTY N' JUSTICE have begun recording their ninth studio album and fifth "all-star" project, "The Cigar Chronicles". Due in the fall, it will once again feature a plethora of "known" singers on the album's 14 tracks. In addition, the CD will include a "who's who" of guest musicians.

Commented LIBERTY N' JUSTICE leader Justin Murr: "With 'The Cigar Chronicles', we wanted everything bigger and louder! The album features big guitars, big hooks, big vocals, and the thing that makes a LIBERTY N' JUSTICE project... big names! This is the most commercial sounding record we have ever released and I promise this record rocks!!"

The project is being produced by Vic Rivera, Steve Brown of TRIXTER, Mike Layne and Stephen Chesney. The album artwork was created by Rex Zachary who was responsible for LIBERTY N' JUSTICE's "Independence Day" cover. 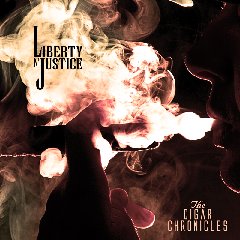