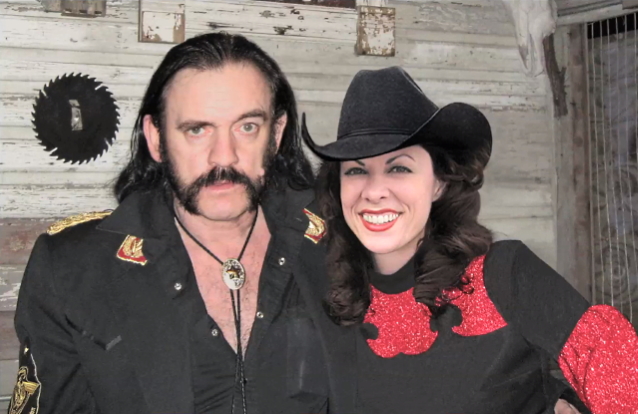 Singer-songwriter Lynda Kay has a new song coming out August 23 featuring the late great Ian "Lemmy" Kilmister of MOTÖRHEAD. The duet, titled "The Mask", is far from Kilmister's well-regarded metal fare. This poignant Willie Nelson-style ballad, paired with Kay's harmonious, yearning voice, reveals a glimpse of his melancholy side, reminiscent of Rick Rubin American Recordings with Johnny Cash. The song was believed to have been lost, but was recently recovered.

Kilmister had begun writing "The Mask" in 1979 and finished it with Kay in 2009. The track will be released as the first single from Kay's upcoming double album, "Black & Gold". The LP features 20 original and cover songs crossing such genres as early '60s mid-century jazz and classic Bacharach pop to '70s roots rock and Memphis soul and was produced by her husband Jonny Coffin (Coffin Case). Musicians performing on her albums include members of bands from John Legend, Jeff Beck, Brian Wilson, Tedeschi Trucks, Rita Coolidge, Jackson Browne and Jenny Lewis.

Some of the songs from "Black & Gold" album will be featured this October on the Golden Globe award-winning series "Goliath" on Amazon Prime when Kay co-stars as herself in five of the eight episodes with the star of the show, Billy Bob Thornton. A bit of interesting history, Thornton and Kay recorded a duet together for Kay's "Dream My Darling" album in 2009.

Known for her contralto voice and genre spanning songs, Kay has been compared to Patsy Cline, Karen Carpenter, and Dusty Springfield. LA Weekly says: "Lynda Kay's breakthrough was recent, but her journey is the thing of which legends are made." Prior to her casting on "Goliath", Kay appeared as herself on FX's "Justified" performing her song "Jack & Coke". At the beginning of each season, Kay was brought in by the series creator Graham Yost to perform her songs for the writers as inspiration, and several of her original songs were licensed to the series and featured on the official "Justified" soundtrack for Sony Madison Gate Records. Her most recent release, "The Allure of Lynda Kay", was recorded at the world-renowned Capitol Studios with Grammy-nominated ultra-lounge producer Brad Benedict.

Kay is a Hollywood darling who's played the last five "Wheel Of Fortune" events, whom Variety calls a "compelling talent… goth-country siren, with her towering beehive and David Lynchian theatrics" and to whom Quincy Jones said "Never, ever stop singing and dancing girl, you got what it takes!" after he saw her perform at David Arquette's wedding.