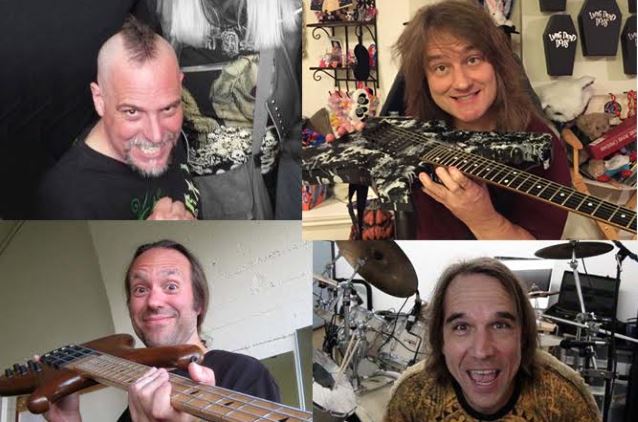 WATCHTOWER, the renowned ultra-prog, tech-metal band from Texas is at it again and finally releasing new material. The band's 1989 "Control & Resistance" lineup — Ron Jarzombek on guitar, Doug Keyser on bass, Rick Colaluca on drums, and Alan Tecchio on vocals — has crafted three new tunes, "M-Theory Overture", "Arguments Against Design" and "Technology Inaction", which are taken from the yet-to-be-released CD "Mathematics".

WATCHTOWER's last release with this lineup was just one solitary song back in 2010, so this event is already three times as good as that one! But seriously, the 2010 single "The Size Of Matter" was released just before the band played Germany's Keep It True festival. After a five-year rest recuperating from that gig, WATCHTOWER finally resumed work on "Mathematics", hoping to eventually complete it before the 23rd century.

Says Tecchio: "I am so psyched to be back with these guys and am fully committed to getting the great songs that were destined to be 'Mathematics' out there at long last— however it is we have to do it. They are awesomely heavy and complicated yet very melodic tunes. It's that classic, signature 'TOWER sound and I know the fans are gonna love it."

Adds Ron: "We've been talking the 'Mathematics' talk for too long, it's time to do some walking. Hopefully, we'll get more songs completed after these three new songs are released. All it takes is a little drive and motivation, and, of course, support from the fans."

Although the future may seem unclear for this ground-breaking group, one thing is for certain: They will eventually get their math homework done one way or another. But fans will undoubtedly have to be patient as the songs will most likely be released in a staggered fashion. The alternative is to wait indefinitely for the entire album to be completed, and that could take forever. Rather than deny the fans any music at all, WATCHTOWER will release songs as they are completed.