The Scottish town of Kirriemuir will this weekend pay homage to one of gods of rock 'n' roll, as it unveils a life-sized statue of Bon Scott, the influential frontman of world-conquering band AC/DC.

Keen to recognize the Scottish roots of the talismanic lead singer — voted No. 1 on a list of the "100 Greatest Frontmen Of All Time" by Classic Rock magazine — the bronze statue will be revealed during the tenth annual Bon Scott international festival, Bonfest, by event organizers DD8 Music. It follows a two-year crowdfunding campaign, which drew support from AC/DC members themselves, as well as thousands of the band's loyal fans worldwide.

The Angus town was home to a young Ronald Bedford Scott until the age of six, when his family left Scotland for Fremantle, Western Australia.

Scott was invited to join the band by Glasgow-born brothers and founding members Malcolm and Angus Young in 1974, and achieved international stardom before his death at the age of 33 in 1980.

To mark the occasion, several of Scott's contemporaries are scheduled to attend Bonfest, along with almost 4,000 avid AC/DC fans from across the globe. During the festival, tribute acts from all over Europe will bring Kirriemuir to life with the sounds of one of its most celebrated sons.

DD8 Music development worker Graham Galloway said: "In 2008, Bon's Australian home town, Fremantle, unveiled a statue of him. At that point we started thinking it might be good to have one here where he started his life.

"The unveiling will take place on Saturday, 30th of April, and will be carried out by some very special guests: Mark Evans, bass player on four of the Bon-era albums; Tony Currenti, drummer on AC/DC's first album; and Mary Renshaw, Bon's seamstress and 'soulmate.'

"We are looking at a total attendance of 3,700 and are expecting fans from all over the world to travel. We have confirmed travellers from the USA, Canada, Spain, Italy, Norway, Germany, Austria, Italy, Switzerland, Australia and New Zealand. All in all, it is shaping up to be an amazing weekend."

The event will be supported by EventScotland's National Funding Programme in its tenth-anniversary year, which has allowed for the erection of a big top festival site and a street party to take place. Bonfest is also supported by Angus Council.

Stuart Turner, head of EventScotland, said: "We are delighted to support the life and work of one of Scotland's most influential and best-loved musicians with our funding of the tenth edition of Bonfest.

"I'm sure that the newly-unveiled statue will serve as further incentive for AC/DC aficionados to make the journey to Kirriemuir in the future to see where Bon spent his formative years, but also to experience all that wider Angus and Scotland have to offer."

Individual members of AC/DC past and present have offered their support previously, with former bassist Mark Evans saying in 2012, "It's so amazing that Bon is getting honored like this, especially since Scotland is such an important place in the history of AC/DC. Bon already had a street named after him in Kirriemuir and now this!"

The statue will be the second of Scott, who was born in Kirriemuir in 1946 but moved with his family to Australia in 1952. An Australian statue honoring Scott has already been on display since February 2008.

The singer died in 1980 at the age of 33 from alcohol poisoning. He sang on AC/DC's first six studio albums, including "High Voltage", "Dirty Deeds Done Dirt Cheap", "Let There Be Rock" and "Highway To Hell".

AC/DC guitarist Angus Young told The Pulse Of Radio a while back that the band almost didn't get past Scott's death. "Bon was the big… He was a full-on frontman, plus he had this great character, you know. I mean, he just lived that rock 'n' roll life. With Bon, what you saw was what you got, and, yeah, it was pretty, pretty tough." 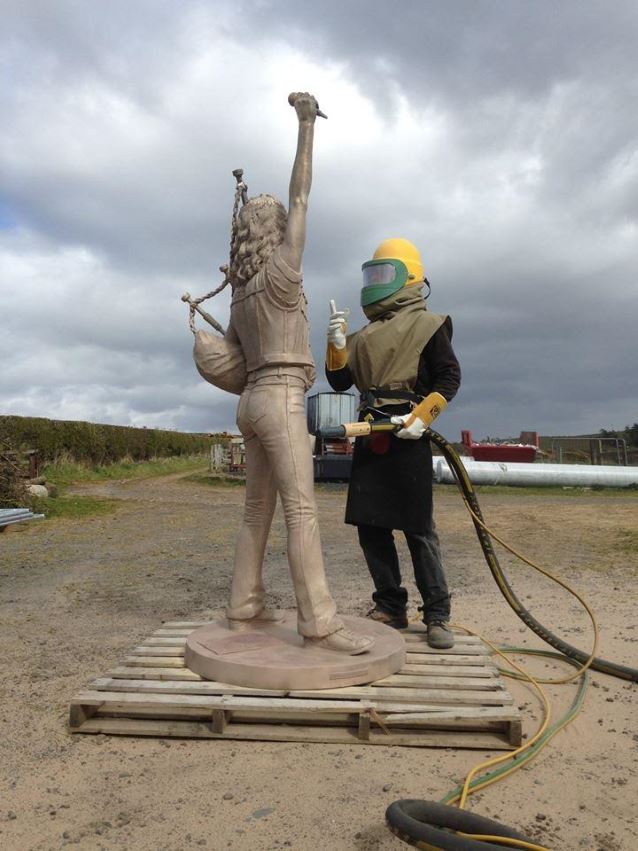