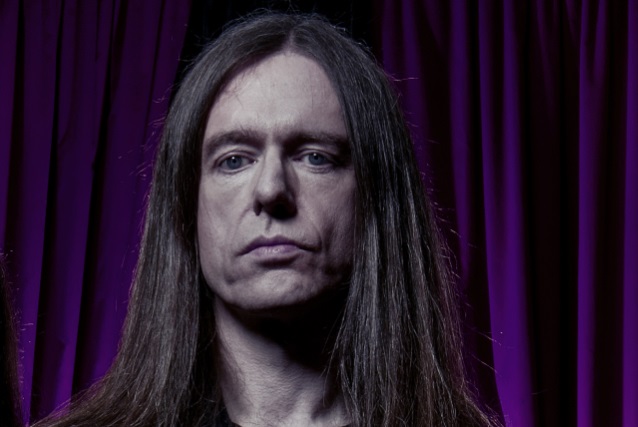 In a new career-spanning interview with music writer Joel Gausten, Lee Dorrian (WITH THE DEAD, NAPALM DEATH, CATHEDRAL) discussed a variety of topics, including fronting NAPALM DEATH during the time of the legendary grindcore band's debut album, "Scum", which celebrated its thritieth anniversary earlier this year. An excerpt from the chat appears below.

Joel Gausten: While preparing for this chat, I realized that "Scum" is thirty years old this year. When you look back at that time, how would you say the NAPALM experience most set you up for the music you're doing today?

Lee: "Hard to say. Mainly, I wouldn't be in a band today if I hadn't joined NAPALM, because I never wanted to be in a band. Musically, in terms of what I listen to and my musical experience, I'd probably be exactly the same. The music I was listening to whilst I was NAPALM and before NAPALM would have evolved anyway, because I was getting more and more into doom and SABBATH-type stuff. Through that, I was getting into more '60s and '70s underground stuff and just moving forward. As a person, I was the same as I am now in terms of what kind of music I'm into. Certainly, if I hadn't had joined NAPALM, I wouldn't have carried on being in bands — that's for sure. It was never my intention to be in a band. I was just good friends with those guys; we got on really well, and they just asked me to join. I had no previous experience or anything. [Laughs] I used to be a concert promoter; I used to book NAPALM DEATH quite a lot of times before I was in them. I used to be like a local hardcore promoter at various venues around Coventry and stuff. That's one of the main reasons I got to know them. I used to do fanzines and things, and we'd also go to the same shows and all that kind of stuff. So there am I one minute just doing that — just putting on some local gigs. The next minute, I'm in this band that kind of explodes and is on BBC TV three times in one week and on the cover of the New Musical Express. It was completely bananas. We were doing these gigs that were selling out around the country, and people were just going absolutely mental. It was kind of a very surreal experience."

Joel Gausten: I can certainly imagine, especially for what you were doing at that time. It was not typical BBC fare!

Lee: "I suppose it was quite a healthy time for music. As much as a lot of people say the '80s was a terrible time for music, I don't think so. Mainstream music was fucking horrible in the '80s, sure, but for punk, hardcore and underground metal, it was the glory days. What was happening in England [at the time] wasn't just about the metal scene, really, because the metal scene was kind of alien to what NAPALM was doing anyway. NAPALM came more out of the punk scene, to be honest. The venues we played at were more about the punk scene. It was only when it became overexposed that the metal audience kind of got into it. But there were a lot of noisy indie bands like LOOP, MY BLOODY VALENTINE and THE CRANES, who we played with a couple of times. There were European bands like THE YOUNG GODS. We didn't sound like any of those bands, but we weren't too far away from them because of the noise aspect. We seemed to fit in with the NME crowd as well as becoming more popular with the metal crowd as time went on. But initially, it was seen as kind of extreme indie music, really. Obviously, the fact that NAPALM was championed by John Peel certainly helped that to no end. Without his initial support, I don't think NAPALM — and the whole scene as well — would have achieved half the success."