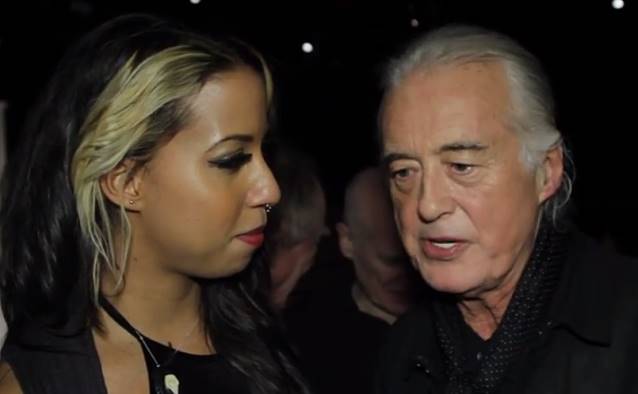 Page accepted the "Film Of The Year" award for LED ZEPPELIN concert movie "Celebration Day", saying: "It was a great concert and we got the energy into the video — well, the DVD… and the Blu-ray. I'm here on behalf of the band and I thank you on their behalf."

"Each of the albums has been remastered but it also has a companion disc with it," the guitarist said. "Let's take, for example, 'Led Zeppelin III' — that's remastered from analog from the original thing. I know everybody does that, but what they don't do.. I revisited all the working mixes that were done at the time."

He continued: "There's different versions. Say, for example, there's 'Since I've Been Loving You' — there's an incredible version of that which is totally different, it's really raw in its approach, it's quite dramatic, it's cool. That's one little item of it, but what it gives is a companion disc to 'Led Zeppelin III'. It'll come out in its own box and all the rest of it. Each disc will give a really intimate picture of the group. That's the idea that I've had with it and I think it's successful."

Page also revealed that he has completed work on the audio portion of the reissue production process.

He added: "It'll come out next year. When I say 'it' — each box comes out separately."

Asked if the reissues will contain any unreleased material, Page replied: "Oh yeah. I can't tell you [what it is]… It's got to be a little bit of a surprise, I can't give all the games away."

Page, who produced all of LED ZEPPELIN's live and studio albums, has served as the band's chief archivist and personally oversaw the remastering of the band's catalogue back in the nearly '90s.