A previously unreleased LED ZEPPELIN instrumental track called "La La" can be streamed using the SoundCloud widget below. The song, which was recorded in 1969, will appear on the forthcoming deluxe edition of "Led Zeppelin II".

LED ZEPPELIN recorded the track, which remains unfinished and appears as a rough mix on the reissue, with the rest of the LP but never made it available until now.

Coming on June 3 will be deluxe editions of LED ZEPPELIN's first three albums: "Led Zeppelin", "Led Zeppelin II" and "Led Zeppelin III". The launch of the reissue program, which is being led by guitarist Jimmy Page, includes the band opening "its vaults to share dozens of unheard studio and live recordings, with each album featuring a second disc of companion audio comprised entirely of unreleased music related to that album."

* Remastered album on CD in vinyl replica sleeve.
* Companion audio on CD in a new sleeve and on 180-gram vinyl ("Led Zeppelin" features a previously unreleased October 1969 concert from Paris; "II" and "III" feature previously unreleased studio outtakes).
* Remastered album on 180-gram vinyl in a sleeve replicating the first pressing.
* High-def audio download card of all content at 96kHz/24 bit (Live tracks are 48kHz/24bit).
* Hard-bound, 70-plus-page book filled with rare and previously unseen photos and memorabilia.
* High-quality print of the original album cover, the first 30,000 of which will be individually numbered.
* "Led Zeppelin" will also include a replica of the band's original Atlantic press kit.

The band wrote and recorded nearly all of "Led Zeppelin II" while touring relentlessly to support its debut album. Incredibly, the album was released just seven months after "Led Zeppelin" in October of 1969. "Led Zeppelin II" features some of the band's most beloved tracks including "Ramble On" and "Heartbreaker" as well as "Whole Lotta Love", considered by many to be one of the greatest rock 'n' roll songs of all time. The album is certified diamond by the RIAA with sales of over 12 million copies.

The "Led Zeppelin II" companion audio gives fans the first peek into the band's recording sessions, with alternate mixes of five songs from the album, backing tracks to "Thank You" and "Living Loving Maid (She's Just A Woman)", and the previously unreleased track "La La". 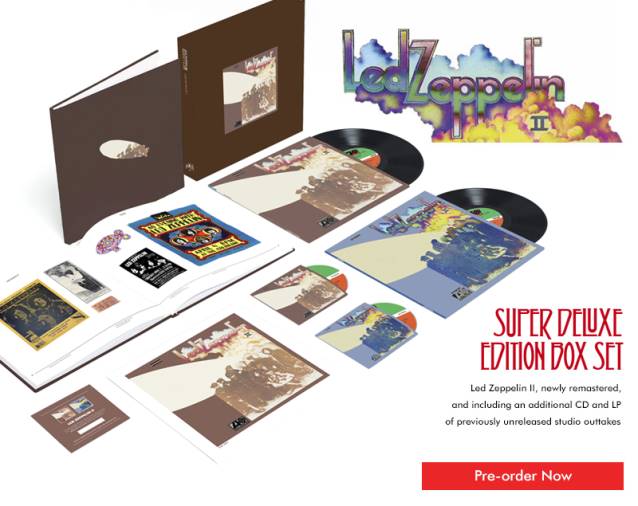