A new book celebrates the most cherished hard rock band of all time, allowing its members to tell its own miraculous and compelling story. "Dancing Days: The Led Zeppelin Reader" — the latest title from Rock Reader Books — traces the history and evolution of one of the biggest selling and influential rock bands of all time.

An official release to online retailers and traditional stores will occur in February 2009, but fans who are eager to get this book in time for Christmas can order directly from Rock Reader Books and have the 220-page title in a week or less.

From its formation as THE NEW YARDBIRDS in late 1968 to its unexpected dissolution in December 1980, following the unexpected death of drummer John Bonham, the group's gripping, magical and sensational ride is depicted in "Dancing Days: The Led Zeppelin Reader".

"Nearly thirty years after its original dissolution, LED ZEPPELIN still continues to be one of the most enduring groups ever," says John D. Luerssen, who compiled and edited "Dancing Days: The Led Zeppelin Reader". "I get a huge kick when I look at the faces of kids who have just discovered the ZEPPELIN catalog. This book is as much for them as it is for the old geezers of rock — like myself — who can’t stop being fascinated by what they contributed to the music world."

"There's a reason that they've sold a staggering 110 million albums, in the United States alone," Luerssen says. "No band since has come close to their legacy." 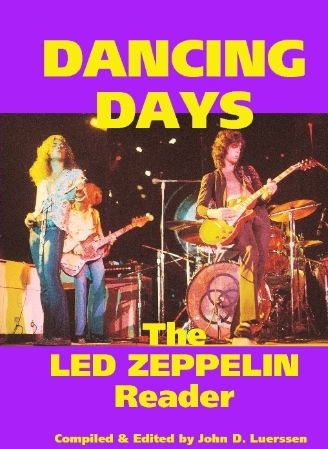