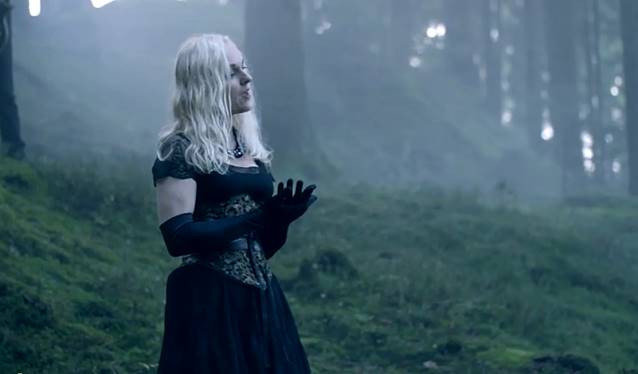 "Hell To The Heavens", the new video from LEAVES' EYES — the German/Norwegian band formed by ex-THEATRE OF TRAGEDY singer Liv Kristine Espenaes Krull and members of ATROCITY — can be seen below. The song comes off LEAVES' EYES' new album, "Symphonies Of The Night", which will be released on November 13 in Spain, Sweden and Norway; November 15 in Germany, Austria, Switzerland, Finland and Benelux; November 18 in the rest of Europe; and on November 26 in North America via Napalm Records. The effort was produced by Liv's husband, ATROCITY singer and LEAVES' EYES co-vocalist Alexander Krull, at his Mastersound Studio in Germany. The cover artwork was created by Heile (a.k.a. Stefan Heilemann).