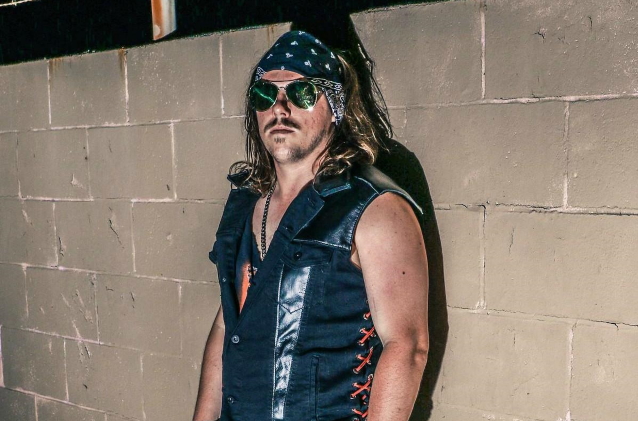 Long-running Orange County, California metal institution LEATHERWOLF has announced a new lineup, comprising drummer Dean Roberts, guitarist Geoff Gayer, and bassist Paul Carman, all of whom featured on the band's classic "Leatherwolf" ('87) and "Street Ready" ('89) releases, guitarist Rob Math and introducing new frontman Keith Adamiak. Work on a new studio album is underway with a view toward a tentative spring 2020 release. One of the first songs completed, "The Henchmen", can be streamed below.

The band said: "As many of you already know from an earlier Facebook post, we have parted ways with our vocalist Michael Olivieri for a second time. This move became inevitable due to disagreements over the band's musical direction, as well as business and personal issues. Fortunately, we were able to find a promising young vocal talent in Keith Adamiak right in our own OC backyard. Keith has a great metal voice, is 100% dedicated to the cause and full of enthusiasm, and has shown us that he has what it takes for LEATHERWOLF to move into the future with confidence.

"As we move forward, the new incarnation of LEATHERWOLF will feature the twin guitar duo of Geoff Gayer and Rob Math, along with a third guitar player we will announce when the time comes. The Triple Axe Attack lives on! Paul Carman, who is out in Colorado these days, has also rejoined the fold and will provide rhythm section duties alongside Dean Roberts on the new album. Right now, our main focus is on writing and recording new material. We've had Roy Z (BRUCE DICKINSON, JUDAS PRIEST), who’s been a fan of the band going back to our backyard party days, in the studio with us helping to dial things in. Everybody has been contributing riffs, lyrics, arrangements, melody lines, with four songs completed so far. Check out 'The Henchmen' to give you an idea what we’ve been up to. Classic early LEATHERWOLF with a twist.

"Last but not least, we are stoked to announce that we will be back in Europe next year to play the Bang Your Head!!! festival in Germany, the first 2020 show to be officially confirmed. We plan on stringing together a bunch of summer shows around BYH to promote the new album and introduce the new lineup. We can’t wait to see you all again. Until then — onward and upward, metal soldiers!"