Originally known simply as LAZARUS, the band has been pummeling audiences with their brand of modern thrash since the spring of 2005. Have no doubts that LAZARUS A.D. is a thrash band, but merely in attitude as their sound is no simple throwback to the '80s Bay Area sound. They breathe a breath of fresh air into modern thrash with intelligent, memorable riffs, mid-tempo grooves, and high-flying solos.

In January of 2007, the band recorded "The Onslaught" with Chris Djuricic (SOIL, NOVEMBERS DOOM, MICHAEL ANGELO BATIO) at Studio One. James Murphy (ex-DEATH, TESTAMENT) handled mastering duties and is now remixing the album for its worldwide release via Metal Blade Records.

"We are extremely stoked about being a part of the Metal Blade family," LAZARUS A.D. said in a statement. "It is a great home for us, and we know together we are going to accomplish everything we have set out to do and so much more. When the record is released, I don't think we are gonna see home much, we plan to tour for pretty much the rest of our natural lives!"

Mike Faley of Metal Blade Records added: "With the growing number of young aggressive thrash bands rising up across America, we were struck down by the sheer brutality and innovative sound of LAZARUS A.D. We brought James Murphy onboard to mix the new album as Metal Blade gets ready to unleash the onslaught that is LAZARUS in early 2009."

LAZARUS A.D. will open for TESTAMENT at The Rave in Milwaukee, WI this Friday, August 1. 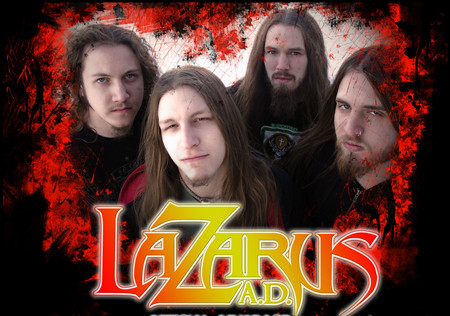