To many, Tommy Bolin was the legitimate heir to Jimi Hendrix's rock guitar throne. Stints with the JAMES GANG and DEEP PURPLE — as well as solo albums and a groundbreaking release with jazz-rocker Billy Cobham — certainly proved that the adulation was rightly deserved. And with a techno-color fashion sense, he certainly stood out from the pack. Only one problem, Tommy had a death-defying drug addiction, which ultimately would lead to a premature and tragic end — before he was able to truly take his standing among the elite musicians of the world. "Touched by Magic: The Tommy Bolin Story" is the first book to focus entirely on the life story of Tommy Bolin — compiled from nearly 50 exclusive interviews (including family, friends, and band members that played alongside Tommy throughout the years), and featuring many never-before-seen photos.

"Touched by Magic" is available through www.lulu.com for $19.98 (U.S.), and there is a sample chapter to read at the site (the chapter is titled "Moxy/Teaser/Deep Purple"). The book was written by journalist Greg Prato, whose work has appeared in a variety of sites and magazines, including All Music Guide, Billboard.com, RollingStone.com, Record Collector, and Classic Rock, among others. A longtime fan of Tommy's music, Greg conducted interviews with such renowned rock names as David Coverdale, Glenn Hughes, Eddie Kramer, Carmine Appice, Jan Hammer, Martin Barre, Jimmy Haslip, Mark Stein, Prairie Prince, Dale Peters, Jim Fox, Alphonse Mouzon, Kenny Passarelli, Henry Paul, Narada Michael Walden, Reggie McBride, and Otis Taylor, as well as Tommy's brother, Johnnie Bolin (among countless others), for the book.

While it will obviously appeal to fans of Tommy Bolin, this 252-page paperback book (whose title comes from a phrase that keyboardist Jan Hammer once said to describe Tommy's guitar playing) will also be of interest to fans of classic rock in general, as large portions of the book focus on DEEP PURPLE, the JAMES GANG, and Billy Cobham, while you'll find additional stories that involve LED ZEPPELIN, Jeff Beck, JETHRO TULL, the MAHAVISHNU ORCHESTRA, the TUBES, MOXY, the OUTLAWS, and Jimi Hendrix's Electric Lady Studios, among others. You'll also get the inside scoop on such classic Tommy-related releases as Billy Cobham's "Spectrum", the JAMES GANG's "Bang" and "Miami", and DEEP PURPLE's "Come Taste the Band", plus Tommy's two cult classic solo albums, "Teaser" and "Private Eyes". Additionally, new information is gathered around the events that led to Tommy's tragic passing in 1976, after a show in Miami with Jeff Beck.

Tommy's following continues to grow each year, as his album "Private Eyes" was recently certified gold in the U.S. (500,000 units sold), Dean Guitars recently unveiled a Tommy Bolin "Teaser" tribute guitar, while Hartman Electronics recently premiered a new Tommy Bolin fuzz pedal. And with the release of "Touched by Magic", the buzz is only going to grow louder about the great ommy Bolin.

"After reading 'Touched by Magic', it seemed to me every interview 'takes you there' for the moment… I give 105 stars to Greg!" - Johnnie Bolin, Tommy's brother. 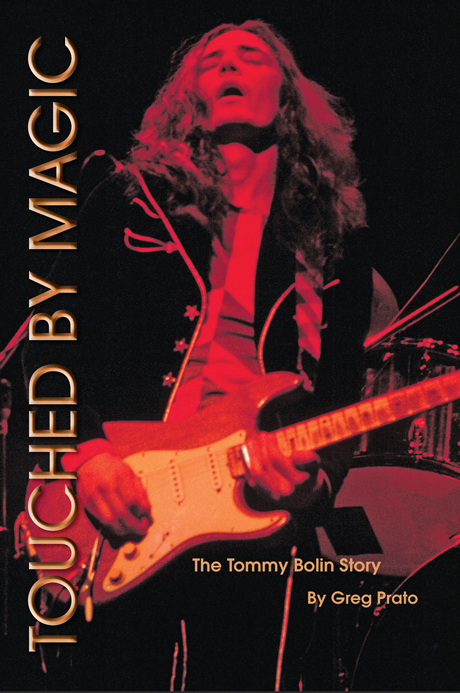