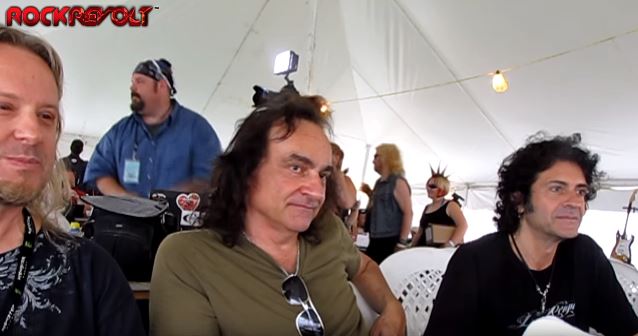 RockRevolt Magazine conducted an interview with LAST IN LINE members Vinny Appice (drums), Phil Soussan (bass) and Erik Norlander (keyboards) at this year's Rocklahoma festival, which was held May 27-29 at Catch The Fever Festival Grounds in Pryor, Oklahoma, just outside Tulsa. You can now watch the chat below. A couple of excerpts follow (transcribed by BLABBERMOUTH.NET).

On the current state of the music industry:

Phil: "It's not bad; it's just that there's a lot more of it. I mean, if you knew somebody in a band back then, that was kind of rare. But the way that music production is accessible to everybody in the digital age, there's a lot more stuff out there. There's still great bands; you just have to sift through a lot of stuff to get to it."

On the digital age making it possible for bands to produce albums themselves as opposed to relying on record labels and expensive recording studios:

Erik: "There's a lot more to it than that. That part of it is great, but the downside of it is, I think music now has become, quote, content, and so a lot of people expect content to be free. It's, like, you can pay five hundred bucks for an iPhone, but then people expect the music to be put on it to be free. And so that's where [things get more complicated]."

Vinny: "That, the downloading music for free… It costs money to make the music and record it. If everybody wants it for free, it's really hard to make those [things] work. And then the fucking radio, they play classic rock. And it doesn't open up the doors for any new music and any of these new bands. And even us, they play one song from us, [and] they [only] play one song. Same old shit. If only they opened up like in the '80s and played new stuff on the radio. And that sells records and makes the business grow."

On the differences between terrestrial radio and satellite and Internet radio:

Phil: "The problem is that satellite radio versus terrestrial radio don't wanna pay the rotalties that they [want them to] pay, so there's a lot of dispute going on with that at the moment. But terrestrial radio has still been a very good source of income to the music industry. You have to think about where the income is coming into the industry to facilitate the industry going forward. So, in the past, like he was saying, record sales was a big thing. We made records and we sold them, and that generated money. So that is now gone. So effectively your album has now become your marketing tool. People give it away, people get it for free, and that gets them to come down to the show."

Vinny: "All the fans went into the merchandise business. That's where you make money on the road."

Phil: "So, as far as terrestrial radio and satellite radio, the music industry granted… Actually, more Internet radio reduced royalty rates so they could start up their business, but they're gonna have to catch up to it."

LAST IN LINE has recruited Soussan to play bass for the group for its shows this spring. Also joining them at the dates was Norlander.