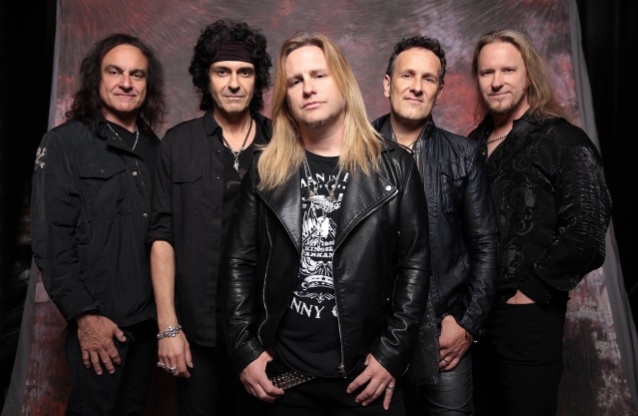 LAST IN LINE has completed work on its sophomore album for an early 2019 release via Frontiers Music Srl. According to guitarist Vivian Campbell, the disc's first single and video will be made available in November. "So watch out for that," Vivian said during the latest episode of his weekly radio show on BBC Radio Ulster.

Earlier this year, LAST IN LINE singer Andrew Freeman told the "Ouch You're On My Hair" podcast that the band's upcoming LP would be "a progression" from 2016's "Heavy Crown". "Jimmy's [Bain, bass] not there now, which is a big change for us," he said. "He was a big contributor. There was stuff that we wrote with him and stuff that we wrote without him; some of the song ideas were his. And we worked really well as a four-piece writing these songs together; it was really cohesive, so everything worked really well together. And now we have Phil [Soussan as Jimmy's replacement]. And Phil's been great too. Phil's a little more of a noodler than Jimmy was, where Jimmy was a little more of a just sit-in-the-pocket, solid bass player. But Phil is an accomplished audio engineer, which is really nice to have, because he's really good with his tone. So it's definitely an asset; it's just a little different."

Campbell, Bain and drummer Vinny Appice were part of the original DIO lineup which reunited in 2012 alongside Freeman to launch LAST IN LINE.

According to Freeman, some of the songs that will appear on LAST IN LINE's next album will be "a little more progressive" than those on the band's first effort. "Some of 'em are right in the vein of the 'Heavy Crown' record, but it's definitely evolving into our own thing, where it's not really 'what would Ronnie do?' sort of thing. Honestly, I'm trying to step away from that a little bit. We have an audience that wants to hear the 'Stand Up And Shout's and the 'Holy Diver's and all that stuff. But I think it comes to a point where, is it imitation or is it really what you're feeling? So some of the songs are… they're barnburners and they're really good, rocking songs, but there's some stuff on there that's a little more progressive."

Bain passed away in January 2016 at the age of 68. He was reportedly suffering from lung cancer at the time of his death.