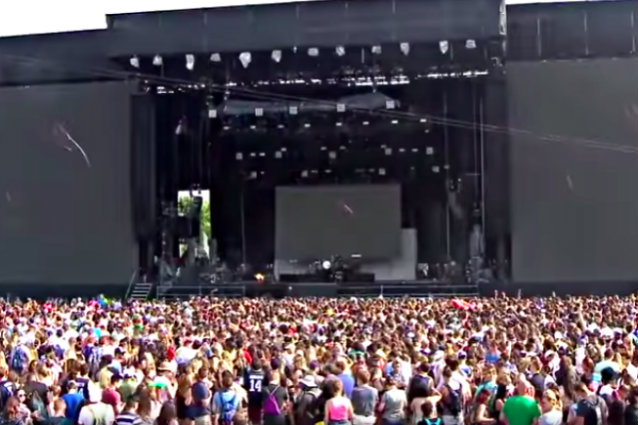 According to The Pulse Of Radio, the gunman who fired thousands of rounds from a room on the thirty-second floor of the Mandalay Bay resort in Las Vegas, killing fifty-eight people and wounding hundreds more who were attending a country music festival five hundred yards away, reportedly booked rooms earlier this summer in Las Vegas and Chicago that overlooked the Life Is Beautiful and Lollapalooza festivals, respectively. Authorities looking into the movements of sixty-four-year-old Stephen Paddock over the past few months reportedly determined that the former accountant booked a room at Chicago's twenty-one-story Blackstone Hotel in early August that overlooked Grant Park, where the Lollapalooza music festival was being held at the same time.

There is no evidence that Paddock ever checked in to the room or got near this year's festival, which featured performances by BLINK-182, LORDE, MUSE, THE KILLERS, ALT-J, CAGE THE ELEPHANT and dozens more, with attendance in the hundreds of thousands.

Meanwhile, the weekend before the October 1 slaughter that Paddock visited upon the Route 91 Harvest country music fest, Paddock rented and checked into a condo in a twenty-one-story luxury building in Las Vegas that overlooked the Life Is Beautiful festival, which also featured MUSE, Lorde, BLINK-182 and many others.

Investigators have struggled for days to determine what led Paddock, a high-stakes gambler whose life before this past weekend was reclusive and somewhat murky, to open fire on the crowd of twenty-two thousand on Sunday night before taking his own life less than fifteen minutes later.

A source with knowledge of the hotel's records said that Paddock checked in to the Mandalay Bay on September 28 and requested an upper-floor room with a view of the Route 91 Harvest festival.

Investigators said that Paddock went on a weapon-buying binge the year before the attack and wondered if he had some sort of mental break at the time that drove him to start making plans for mass murder. Some nineteen guns were found in the hotel room, with more discovered at one of the killer's two homes in Nevada.