In a brand new interview with Mojo magazine, METALLICA drummer Lars Ulrich addressed what many people perceived as the band's self-conscious attempt to reposition itself as an alt-rock act around the time of 1996's "Load" album, complete with promotional photos that included the bandmembers posing in suits and smoking cigars.

"For many years, we had this complicated relationship with hard rock and heavy metal where we felt musically connected to the genre, but, in terms of some of the imagery and attitudes and what we perceived to be the clichés of that world, we tried to run as far in the opposite direction as possible," Lars said. "So with the success of [1991's] 'Black Album' — we weren't expecting it to be a phenomenon — when we regrouped a couple of years later, we really wanted to make sure not to duplicate that record."

He continued: "There was five years between 'Black' and 'Load'. The really funny thing that happened in those years was that all four members of METALLICA showed up with haircuts. There was this presumption that we all sat around the table together and said, 'Maybe we can get a four-for-one at the barbers,' but I can guarantee that none of us talked to the others about hair. And cigars? Hetfield started smoking them. I never asked him why."

EXODUS guitarist Gary Holt, a longtime friend of METALLICA who played with Kirk Hammett in an early incarnation of EXODUS, was asked a few years ago by author Mick Wall how he thought late METALLICA bassist Cliff Burton — on the tenth anniversary of his death — would have felt about METALLICA's musical and visual evolution.

"I know one thing," Holt said. "They would have never got Cliff to cut his hair off. I'll go to my grave believing that. And I don't think Cliff would have been too fond of band photos smoking cigars and drinking martinis with short hair and suits on. That just wasn't him, you know?"

John Bush, who was once asked to join METALLICA but turned down the offer to remain with ARMORED SAINT, sees things from a different perspective. "If, as an artist, you're not taking any chances, you're a pussy — that's what I think," he told Wall. "So I don't have a problem with 'Load'. What was worse, in my eyes, was that it seemed a little bit forced, in the sense of their image. It was trying to stay away from the whole 'metal' term, and I think it was a little bit exaggerated. But there were still some great songs ... I don't think they have any reason to have any embarrassment for it, by any means."

METALLICA's new album, "Hardwired... To Self-Destruct" will be released on November 18. The long-awaited follow-up to 2008's "Death Magnetic" consists of two discs, containing a dozen songs and nearly 80 minutes of music. 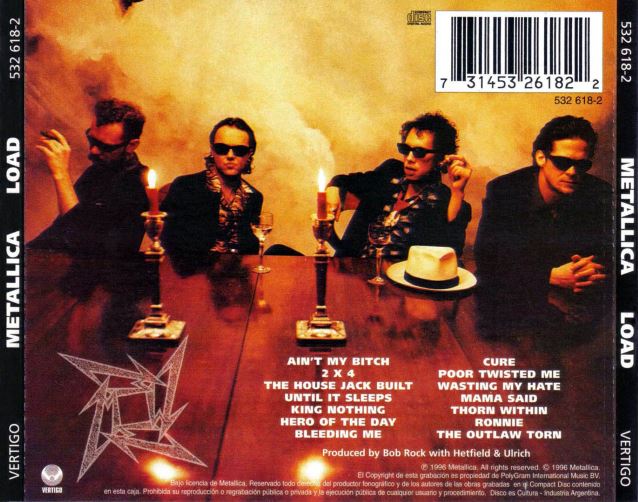