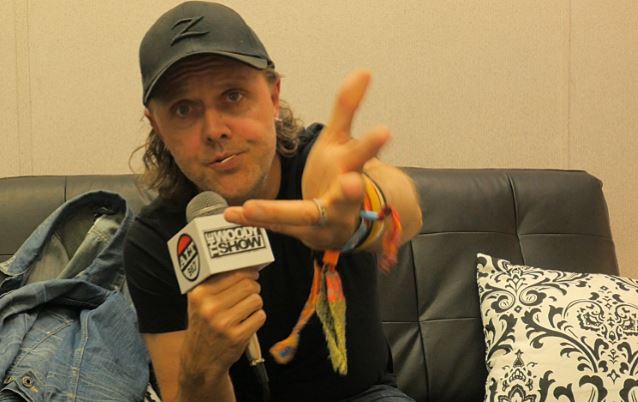 "The Woody Show", which airs on the Los Angeles radio station ALT 98.7 KYSR, conducted an interview with METALLICA drummer Lars Ulrich at the Rock In Rio USA festival on May 9 in Las Vegas, Nevada. You can now watch the chat below.

Speaking about a possible release date for METALLICA's next studio album, Ulrich said: "Compared to the age of the earth and the age of man populating this wonderful planet, it is very close by. I wouldn't hold my breath or skip going to the bathroom, but it's coming."

It's been nearly seven years since METALLICA last released an album, and while the band is now writing material for its next studio effort, guitarist Kirk Hammett admitted to something that may have slowed down the process a bit. Hammett said on "The Jasta Show" podcast, "I put riffs on my iPhone, but something very unfortunate happened to me about six months ago. I lost my iPhone [containing] 250 musical ideas. And I was crushed. It didn't get backed up. And when it happened, I was bummed out for about two or three days."

Hammett added, "I lost [the phone]. I just plain lost it. I can't find it. I'm still looking for it to this day. I just set it somewhere and... It still might turn up. I'm hoping it will. To try to remember those riffs? I can only remember, like, eight of 'em. So I just chalked it down to maybe it just wasn't meant to be and I'll just move forward with it."

Asked what the new songs sound like, Hammett replied, "Let's just say that the stuff that's coming up is super riffy, super heavy… It's a lot similar to [2008's] 'Death Magnetic' but different in certain parts."

METALLICA has not revealed when it plans to begin recording the new album.