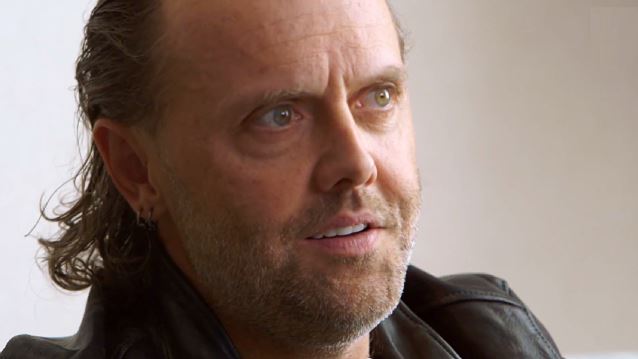 METALLICA drummer Lars Ulrich has praised "Montage Of Heck", a documentary about late NIRVANA frontman Kurt Cobain, as "a great piece of filmmaking," but has admitted that parts of the movie were "almost too much" to watch because they "took a little bit of the mystique away."

"Montage Of Heck" marks the first time any authorized film about the life of Cobain has been made. Brett Morgen ("Crossfire Hurricane", "The Kid Stays In The Picture"), who serves as writer/director/producer on the doc, had full access to Cobain's personal archives and has dug through countless amounts of home movies, recordings, pages of writing and much more, all of which has never been seen by the public.

Asked for his opinion of "Montage Of Heck", Ulrich told the "Sixx Sense With Nikki Sixx" radio show (hear audio below): "I thought it was a great piece of filmmaking. I thought it was unique; [I'd] never quite seen a film like that. I loved being that close to [Kurt], but I also had issues being that close to him, because it took a little bit of the mystique away. And I was kind of sitting there going, 'Do I really need to see Kurt Cobain in a bathtub?' Do you know what I mean?! That kind of stuff."

He continued: "I thought, as a film, it was a fantastic, original, very brave piece of filmmaking. And I thought it was very courageous and very daring. And I applaud the fact that the film was made. ]But] as a fan of Cobain, and as a fan of NIRVANA, it was almost too much, it was almost too close. Do you know what I mean?! Because, now, next time I hear 'Come As You Are' or one of those songs, I'll still sit there and think of him in a bathtub of him shaving, or that scene at the end where he's holding [his daughter] Frances [Bean Cobain], and some of that stuff, which was challenging to watch."

Ulrich went on to say that he "literally just saw [the movie] three or four days ago" and didn't get a chance to formulate a conclusive opinion of it yet. He said: "I'm still putting it together. I'd like to see it again."

He added: "As a movie, I thought it was really smart and very well made and I really admire the direction of it and how it was put together. Like I said, as a documentary, it's very, very… I mean, you're not gonna get any closer [to him] in terms of a biography… But, as a fan, it's, like, 'Woah, that was almost too much.' So I'm still putting it together. But I thought it was very interesting, and I look forward to seeing it multiple times more."

"Montage Of Heck" has been in limited theatrical release since last month and premiered on HBO on May 4.

METALLICA is no stranger to making revealing documentaries, having previously released "Metallica: Some Kind Of Monster", which followed the band through the three most turbulent years of their long career, during which they battled through addiction, lineup changes, fan backlash, personal turmoil and the near-disintegration of the group during the making of their "St. Anger" album.