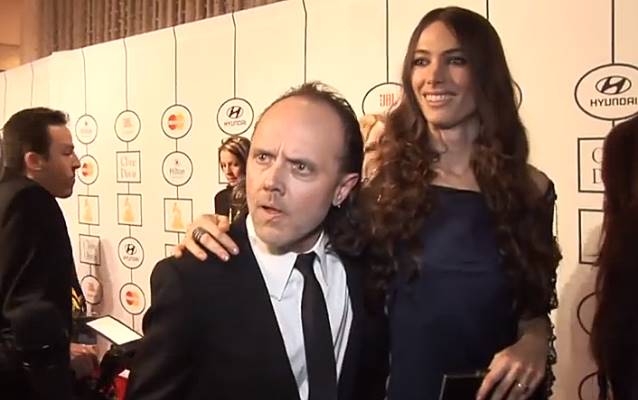 METALLICA drummer Lars Ulrich spoke to HitFix on the red carpet of the 56th annual Grammy Awards, which was held Sunday night (January 26) at the Staples Center in Los Angeles. You can watch the chat, during which the 50-year-old musician was joined by his fiancée, 29-year-old model Jessica Miller, below.

Asked if METALLICA is going to make another movie following last year's "Metallica Through The Never", Ulrich laughed and replied: "One at a time." He then added: "The next thing we have to give birth to is another record, so that's the focus for '14 and '15."

Regarding whether METALLICA fans can expect to see the follow-up to 2008's "Death Magnetic" before the end of this year, Ulrich said: "I would say [it] definitely [will] not [be released] before '15."

Lars also spoke about how making the "Through The Never" movie got METALLICA re-energized to do what they do best: make music.

"[Working on the film] gave us a chance to experience a whole other way of being creative and having a creative outlet," he said. "We were very inspired by making that [movie], and now we're energized to make a record. The film was fun, but it's all about the next record."

Ulrich recently spoke to U.K.'s Kerrang! magazine about METALLICA's mindset going into the songwriting phase for the band's next album. He explained: "The only thing I can tell you is that there seems to be a consensus in the band that 'Death Magnetic' was a really good record that we're proud of, that had good legs on it — meaning that it still sounds really rocking five years later. And I can tell you that with most of the previous METALLICA records, I found any faults, I had any issues with them way, way sooner than five years. So the stuff that we've been jamming on is certainly not a million miles removed from where we left off from 'Death Magnetic'. But two years from now, when I sit and talk to you about the new record, it'll probably be a different story from the six-year-old looking for the ice cream shop."