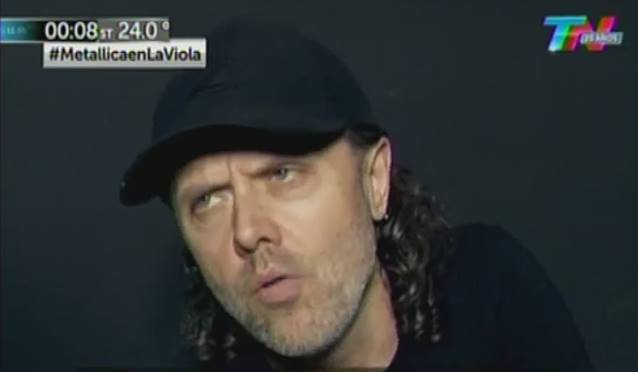 METALLICA drummer Lars Ulrich was interviewed earlier this month on the "La Viola" show on the Argentinian TV channel TN. You can now watch the report below. A couple of excerpts follow (transcribed by BLABBERMOUTH.NET).

On whether all the criticism has encouraged METALLICA to do things differently over the years:

Ulrich: "I think METALLICA has been criticized more or less since the beginning. I mean, the hard rock fans take it very seriously, and I think sometimes too seriously. They're very vocal — they're passionate — but sometimes you have to kind of balance that off with saying, 'Okay, everybody, let's just calm down. It's just rock and roll,' or whatever. So I think we try to find the right balances. The members of METALLICA have always been very curious and very interested in different things and open to different ways of doing things. I think when we were young, when you're not so confident, when we were young, we were really trying to play a lot and show how talented we were. Now, I think, we're not so worried about whether people think we're talented or not. Now, because we're so comfortable with who we are… I think as you get a little older and get a little more experience, you become less worried about what people think of you and you become more comfortable with yourself. I think we've always tried with our fans to say, 'We are METALLICA and we will do things our way, we will do it differently. Come along for the ride, but if you wanna come along for that ride, know that it's gonna be a ride that's gonna take us to many different places."

On whether he and the rest of METALLICA were joking when they said they were "Beliebers" — a.k.a. fans of pop singer Justin Bieber:

Ulrich: "No. You know, he's a talented kid. He's talented. I mean, obviously, he doesn't make it easy for himsef, and I can only imagine how difficult it must be to have to deal with everybody being on top of him 24 hours a day; I don't wish that upon anybody."

On what kind of music he listens to in his spare time:

Ulrich: "I listen mostly to what my kids listen to, 'cause they always hijack the stereo, they steal the stereo in the car. We get into the car and they take control of the iPod. So, thankfully, my kids listen to SYSTEM OF A DOWN, FOO FIGHTERS, ARCTIC MONKEYS, QUEENS OF THE STONE AGE, AC/DC…"

Ulrich: "It's exciting. It's been an exciting time. The last, I don't know, six months, we finished our movie, we went to the Antarctic, we played the Grammys again, which was nice. We've started writing songs and preparing for the next record, so that's very exciting. We're down here among all of you beautiful people and playing [the] 'By Request' [setlist] and going to new places. We were in Quito two days ago, where we'd never been [before]. We're playing a new song ['The Lords Of Summer'] on stage, which people seem to be very receptive to. We're writing away. We've got some good ideas. Our biggest problem is not the ideas, our biggest problem is time. METALLICA is busier than ever, and it just seems like there's more and more going on and the days get shorter and shorter. But, hopefully, we will be done writing this year and next year we should record and hopefully have a new record out maybe next year. We'll see. Hopefully next year."