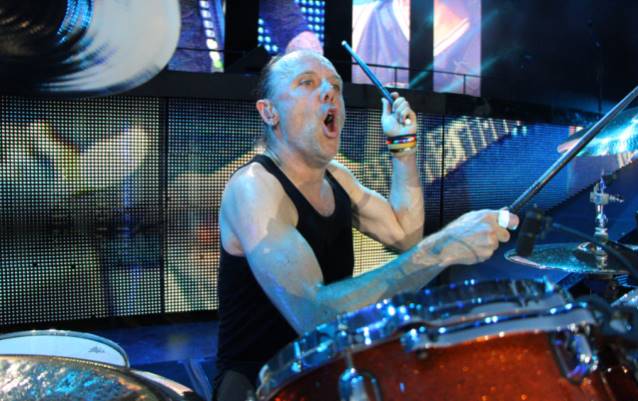 METALLICA's Lars Ulrich has officially accepted a drum-off challenge that was recently extended to him by actor Will Ferrell and RED HOT CHILI PEPPERS drummer Chad Smith.

After Ferrell and Smith had their long-awaited epic drum battle that saw Ferrell defeat his amazing lookalike Smith, Ferrell spoke about getting Ulrich involved in the next event, telling Spin, "We did talk about another drum-off. With a third person that looks eerily similar to Chad and I. A third drummer out there... We talked about Lars, from METALLICA." Ferrell added, "Lars gets pissed because he gets mistaken for both me and Chad Smith. He can settle that score now, too." Smith added, "There it is. The gauntlet is down."

Ulrich issued a statement to Spin revealing his interest in the drum battle, stating, "It was a little lonely on the sidelines during the first drum-off, given the somewhat forced nature of the lookalike element between Chad Smith and Will Ferrell, when I'm TRULY the one carrying that dead-ringer gene around!

"As for any further drum-offs, I'm sure that with a bit of practice, I could give Chad a run for his money. But Will? That's a whole different story. He rules the 'bad-ass drummer universe.' I mean, you're talking about a guy who's so next level, actually, so beyond next level, that he may just be completely unreachable!

"That said, I'm definitely up for the challenge … Bring it on!!!"

Smith has since responded on Facebook, writing: "Two pieces of advice for Lars: Leave the double bass drums at home and load up on cowbells!"

The musical event of the millennium took place last month when Smith and Ferrell held their drum-off on "The Tonight Show Starring Jimmy Fallon".

The pair showed up on the program in matching black leather jackets, KISS T-shirts, sneakers and blue baseball caps worn backwards, and sat down with Fallon to discuss the history of their "feud" — with each speaking as the other person.

The rest of the CHILI PEPPERS showed up to play BLUE ÖYSTER CULT's "(Don't Fear) The Reaper" with Ferrell switching, of course, to cowbell. Fallon presented Ferrell with a golden cowbell at the end, announcing him as the winner.

The drum-off was staged to support the charities Cancer For College and Little Kids Rock.