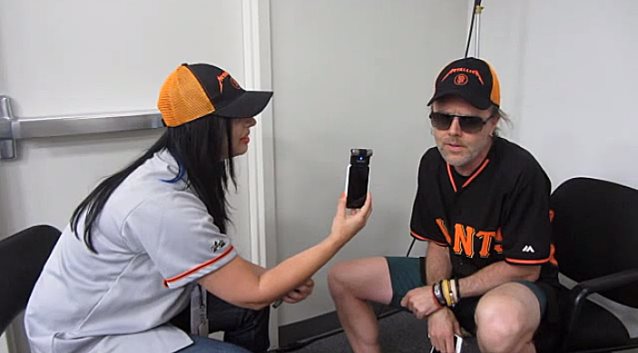 "Metal Zone" host Nikki Blakk of the San Francisco, California radio station 107.7 The Bone spoke with METALLICA drummer Lars Ulrich before the second annual "Metallica Night" on May 16 at AT&T Park in San Francisco. You can now watch the chat below.

Speaking about the progress of the songwriting sessions for METALLICA's follow-up to 2008's "Death Magnetic", Ulrich said: "I don't think there's any more ways of saying it. We've run out of clever soundbites. It's time to make another record. I mean, we made the ['Through The Never'] movie; it was a lot of fun. We did the [Orion Music + More] festivals for a couple of years, we did the Lou Reed thing ['Lulu' album collaboration]. All those things were a lot of fun, and certainly, I think, very inspiring. And, obviously, the Orion festival is something that we hope to come back to, if not every year, then hopefully every couple of years or whatever. But, listen, we've just gotta make another record; it's that simple. Or, in this case, not that simple. But in between Ozzy [Osbourne] tributes, and [James] Hetfield [METALLICA frontman] doing his thing last year, and Giants day here, and this and that, and a couple of European runs, we get a little bit of time in there occasionally. I think the best way of kind of summing it up is that today we're one step closer to releasing the next record than we were yesterday. Literally."

He continued: "I can tell you, all kidding aside, I'm pretty convinced that 90 percent of the record is actually written, it's just gotta be kind of assembled between all those riffs. It's just a matter of connecting this to this and sort of shaping it into a song. And so, I'm pretty psyched about that."

Ulrich also described the METALLICA songwriting process, telling Blakk: "When we write songs, we don't really write a song at a time, we write kind of more like… We take passes at a bunch of different things at the same time. So we'll, sort of, develop maybe ten ideas, and then we'll go back and develop those ten ideas again, and then we'll, sort of, keep embellishing them, I guess is the word. We rarely write a song, and now we're gonna write a second song. We sort of have 10 balls in the air, or 20 balls in the air, and then we sort of keep moving them around, moving sections around and embellishing, like, 'Take this intro and put it over here.' So it's more that type of thing, is what our songwriting sessions often are.

He continued: "Like I said, I'm pretty convinced that most of the raw material actually exists. It's just a matter of connecting the dots. And we're not busy with all this other stuff that we're doing… I've said this before, we've applied for 28-hour days, but we haven't gotten word back yet, because the four extra hours that we would get out of that would certainly expedite the making of the next record — it would get it sooner. But we're still stuck with 24-hour days and something about six-hour minimum sleep requirements and kids that have to go to school and all the rest of it. So we try to use the rest of the time as wisely as we can in connecting these dots. And it does move forward, but maybe not as fast as we would like and certainly not as fast as a lot of our fans would like. It's certainly not 'cause we're avoiding it."

METALLICA recently completed a South American tour where the band played a nearly all-request set, with 17 songs chosen online by fans prior to each gig and the last slot filled by the new track "Lords Of Summer".

Ulrich told RollingStone.com that "Lords Of Summer" "is fairly representative of where our creative headspace is at right now. It's one of those things that's like, 'Here, we're writing and we're creating.'" However, according to guitarist Kirk Hammett, even that track is still being refined.

Ulrich said that U.S. fans might get to experience "Metallica By Request" either next year or in 2016, depending on when the new album is finished.