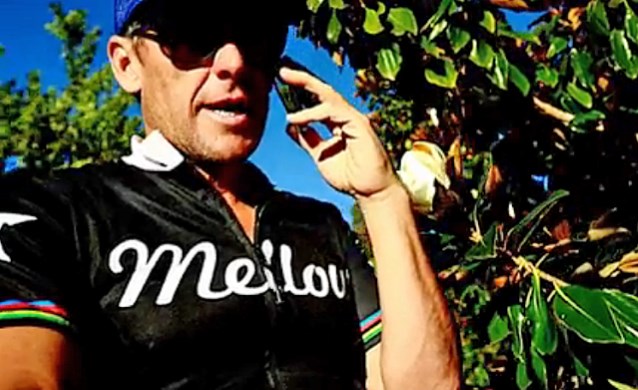 Rolling Stone has premiered "Mountain Lion", the electrifying new video from FUTURE USER, the new project from RAGE AGAINST THE MACHINE/AUDIOSLAVE bassist Tim Commerford. "Mountain Lion" is the fourth video from FUTURE USER, but the first to reveal Commerford as the band's frontman/bassist. Previous videos featured Commerford as a mask-wielding character named S.W.I.M., which stands for Someone Who Isn't Me, an internet acronym often used in online forums.

"I wanted this to be more about music than personality," says Commerford, who formed FUTURE USER with collaborator/composer Jordan Tarlow. "That meant launching this project without letting people know it was me. Fair or not, we knew the songs would immediately draw comparisons to my past work, so it was important to let the music begin with a life of its own. We started releasing songs four months ago, so it feels like a good time to now let the cat out of the bag. Hopefully fans will be intrigued and go back and check out the other songs and videos and give them life all over again."

About the controversial "Mountain Lion" video, which features a cameo by Lance Armstrong, Commerford says, "Lance is a friend, an awesome person, and, as far as I'm concerned, a punk-rocker. We're 'cycling buddies' and typically go after each other in a trash-talking/'I'll one-up you' kind of way. We'll jokingly leave each other voice messages like, 'Dude, I'm gonna crush you the next time I see you. I'm gonna take you down.' I thought it'd be cool to put one of his voice messages in the song. When it came time to make the video, I asked him to recreate the voice mail and he was totally cool with it."

"Mountain Lion" is about the government's attempts to use the controversy surrounding performance-enhancing drugs as a distraction from their own global sins. In the spirit of one-upsmanship that characterizes Commerford's relationship with Armstrong, the latter's taunt becomes the impetus for Commerford to light himself on fire at the video's end. "It was intense," he laughs. "Like, okay, you're gonna kick my ass? Well, let's see if you can do this."

Whatever Commerford's take on it may be, you might imagine this as a subject Armstrong would rather avoid than be associated with in a song and video. Yet Commerford says, "He's fearless. He's not locked in his house, hiding from people. If you live in Austin, Texas, he's out there riding his bike and running. Let's not forget, this is a guy who raised $500 million for cancer research and people love him. I love him. I think he's badass."

"Mountain Lion" isn't the first unsettling video from FUTURE USER to feature a noted sports figure. The band's first video was "Clockwork", a polarizing clip about police militarization in which tennis great John McEnroe was (literally) waterboarded by Commerford, dressed as the character S.W.I.M. That clip was released in September.

"We put a lot of time and effort into planning the videos," says Tarlow. "Tim and I usually approach topics from different angles, pitting left versus right and libertarian ideas versus spiritual messaging, but eventually," he laughs, "we zero in on a common target."

"Mountain Lion", "Clockwork", "Supernatural" and "Medication Nation" will all appear on FUTURE USER's debut album, "#SteroidsOrHeroin", out February 24 through the band's own label, Middle Ring Partnership.

Commerford calls the band's sound prog-tronic, a mix of early prog rock and modern electronics. Says Tarlow, "Listen to it and you hear the late '60s prog rock of KING CRIMSON and even SABBATH filtered through the EDM side of the current modular synth resurgence. Fans of Tim's past work will find familiar elements, but we've got a sound all our own.”

Commerford, who handles vocals and bass on the album and Tarlow, who does keys and programming, produced the album themselves. They were joined by drummer John Knox and Commerford enlisted a special guest to play guitar: Grammy-winning producer Brendan O'Brien (PEARL JAM, BRUCE SPRINGSTEEN, RAGE AGAINST THE MACHINE). O'Brien plays guitar on every song on the album, but is not officially in the band. The album was mixed by Tom Syrowski (PEARL JAM, BRUCE SPRINGSTEEN, AC/DC).

"We went into it wanting to try to make music without any guitar on it," admits Commerford, "and so the songs that we wrote were more electronic and were meant for programming to take the place of the guitar." But he finally couldn't resist bringing in another friend to add some guitar parts. That pal was O'Brien, the famed producer who helmed RAGE AGAINST THE MACHINE's landmark albums. O'Brien is lesser known as a guitar hero. "It's insane for me to say this," Commerford acknowledges, "but I've never been in a room with anyone that's more talented on the electric guitar than Brendan O'Brien. You can call out any song from any band from the classic rock era — LED ZEPPELIN, YES — and he will play it note for note, exactly, and not just the chords but the solos. When I asked him if he'd be willing to play guitar, he came right down and started knocking songs off."

Throughout the years, one element hasn't changed for Commerford. "I think you still need to use music as a way to say something that's important, and I'm always gonna do that. Always," he says.