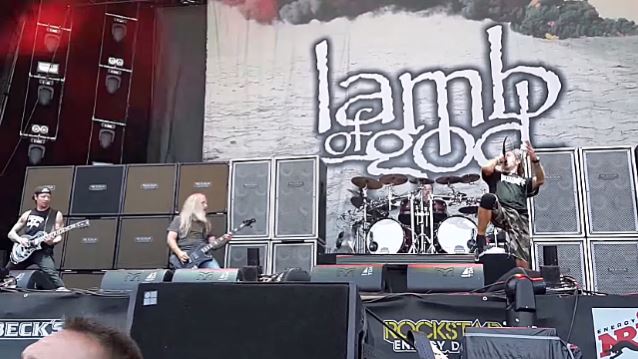 Australia's The Rockpit recently conducted an interview with guitarist Mark Morton of Richmond, Virginia metallers LAMB OF GOD. A couple of excerpts from the chat follow below.

The Rockpit: How was the creative process on [your upcoming album "VII: Sturm Und Drang"]? Was it any different to previous albums?

Mark: It was basically the same, I would say, but I would characterize the writing on this album as being fairly signficantly more collaborative than the last couple of albums. The last few years, it's been, Willie [Adler, guitar] and I will bring in pieces of music that are very much put together, and this time around, that wasn't the case. We were, kind of, more bringing in bits and pieces and seeing what would fit with what, so I think it made for a bit different process than we've been in the last couple of albums.

The Rockpit: Since the last album, "Resolution", you guys have been through a lot together, especially with [singer] Randy [Blythe]. How much of an impact did it have on this album?

Mark: On the music, I would say none. On the lyrics, it kind of references some of that situation. But music is music.

The Rockpit: Was there anything in particular during that whole turmoil with Randy in prison that inspired you, as far as writing riffs and that kind of stuff?

Mark: Not directly for me. I'm kinda always writing. People, so often, when we do interviews, they want to make that connection. Like, while Randy was going through that, we were sculpting this piece of art to reflect the struggle that was happening. It would be unfair to characterize it that way. When Randy was on trial and was in prison, we were worried about our friend; we weren't worried about the band or how it would affect the band. We were worried about our good friend and when he was exonerated we got back to what we do, which is making music.

Mark: There are guest vocalists on the album, Greg [Puciato] from THE DILLINGER ESCAPE PLAN is on "Torches" and Chino Moreno from DEFTONES is on "Embers". As far as how "Overlord" came together and along with the rest of the stuff, when Randy heard "Overlord", he instantly knew he wanted to do something melodic over it, and once we heard his idea for it, we knew that's how it was going to go. And "Torches", yeah, that's an oddball song. That was one I brought in, and I didn't expect the guys to like it because of the way it was arranged, and, to my surprise, they took to it. I don't know what else to say about them other than how they were initiated. They came together just like all the rest of the stuff, with us kinda learning the first couple of riffs and then starting to build off of it.

The Rockpit: You mentioned how, [with] "Torches", you were surprised by how the other guys accepted it. Is that something that you have tried to do on previous albums before?

Mark: Not that particular song, but yeah, I'm usually one of the guys that's more motivated to do something out of the box for us, and I guess that would fall in that category. But I think, these days, as a band, we're pretty interested in doing something fresh that we haven't done before, to keep it moving forward. So it's not as much of a struggle as maybe it used to be to break outside of the mould.