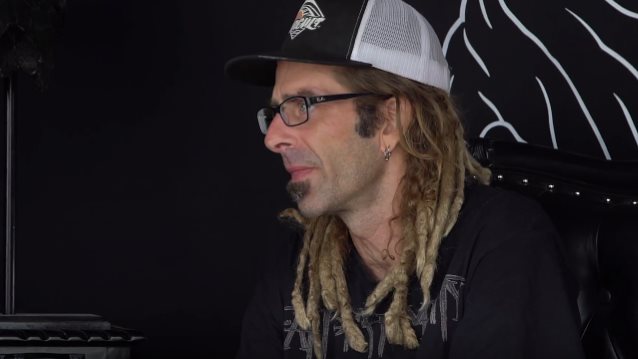 Randy Blythe says that he needs to take a break from LAMB OF GOD activities in order to focus on his personal life.

The Richmond, Virginia-based metal outfit has spent most of the last two years touring in support of its most recent studio album, 2015's "VII: Sturm Und Drang", which was partly inspired by the singer's experience of going to prison in the Czech Republic on charges of manslaughter for killing a fan. He was later found not guilty in that incident, which led him to write "Dark Days", his memoir where he shared his whole side of the story publicly for the first time.

Speaking to Terry "Beez" Bezer of BlackCraft cult clothing at last month's Chicago Open Air festival, Blythe stated about LAMB OF GOD's plans for the rest of the year: "When this tour cycle ends… Right now we're out with SLAYER and BEHEMOTH; that got added on to the end of the tour cycle. If anything else gets added on, whenever that's done, then we're done for a while. 'Cause we've been out for a while on this, with some breaks."

Blythe said that it's good for a band like LAMB OF GOD take a break in order to recharge its creative batteries. "If you just keep on churning out product, your next choices are gonna be informed too much by your previous ones," he explained. "So I think some time off will give us some time for creative development."

Asked if he feels like now is a good time for LAMB OF GOD to take a break, Blythe said: "To me, it doesn't really matter what the time is — if it's good, it's bad, it's whatever — it's what has to happen. I personally have to have some time off, or I'm gonna lose my mind."

The vocalist, who is also a skilled photographer and an avid surfer, admitted that he was "getting stretched a bit thin" between the LAMB OF GOD touring commitments and his outside interests. "The band takes up so much of my mental space that it's really hard for me to concentrate on these other aspects of my life, both creative and personal," he said. "I mean, to be frank, I just need to spend some time with my wife, I need to hang out at home and be like a normal human being. I understand that the fans always expect new stuff and they want you gone, gone, gone, gone, but I'm a human being. I'm almost forty-seven, and I need to be with my wife. I'm a normal guy. Everybody else gets to go home; band guys, that's not what happens."

According to Randy, he hasn't had a proper break in more than five years, since before he spent time in jail and wrote his first book. "I got arrested and that took up a lot of… all of that," he said. And after I was arrested, we toured immediately while waiting for trial, got out, went to trial, toured immediately after that, then immediately wrote a new record, immediately — pretty much — recorded it, no one knew, went back on tour, and that hasn't stopped. And that was our last record. It's been, like, plan, plan, plan, plan."

Randy said that most LAMB OF GOD's fans aren't aware of the substantial emotional and time investment that making new albums and going on the road demands. "Nobody sees that," he noted. "They see, 'Oh, they have a record,' 'Oh, they're on tour' — they don't understand all the surrounding aspects of it. It requires a lot of energy and stuff.

"Man, if I wanted to just sit on my butt and look at the wall for a year, I will," he added. "It's good. I'm a person. This isn't like a regular job where you get to walk away from [it]."

Blythe also talked about his next book, which will chronicle how travel, surfing, and photography changed his perspective on life.

"The last book was so dark — it was about getting locked up and all that stuff — so I told my agent, I was, like, 'The next book can't be depressing at all,'" he said. "I wanted to just write fiction, which I have a couple of outlines for novels. And he was, like, 'Write another non-fiction book first, because you'll get an advance immediately.' My last book was a best seller, and the company was just, like, 'Write us something more. We'll pay you.' So there's the pragmatic level of that.

"It's gonna be about perspective and things that have changed my perspective for the better in my life," he continued. "One is travel. I think people that don't travel… it narrows your view on life. I think people need to go…. Wherever you're from, I think it's important to go outside your area, meet other people, learn about other cultures. That's changed my perspective for the better. Photography has literally changed my perspective, because it's changed the way I see everything. It's the way I frame things, it's the way I pay attention to life — everything. I'm constantly looking at a picture. So that's been really good artistically for me, and it's broadened my perspective. And the other thing that has changed my perspective for the better on a purely physical level — 'cause you can't just have emotional and mental; you have to be physical as well… Physically, surfing… I started surfing, like, I don't know… five years ago while I was writing my [first] book. It's just taken over my mind and my body and it's made me a much more balanced person, physically and emotionally, I guess. So in order to combine all these things — photography, travel, surfing — tax-deductable surf trips to take photos and write a new book. There it is! I'm a fucking genius!"

In a recent radio interview, LAMB OF GOD guitarist Mark Morton played down Blythe's suggestion that the band would be taking a break following the completion of the touring cycle for "VII: Sturm Und Drang". He said: "Very often when we sort of go out of the public eye in terms of what we're doing as a band and things that are being publicized and doing interviews, it doesn't mean we're not working. It takes us a fair amount of time to write and record these albums that we put out, so a lot of times we'll go off the radar and we're still working our little butts off to put music together, and then it comes out and then people hear it, and it's, like, 'Where did this come from?'"

LAMB OF GOD's six-week North American tour with SLAYER and BEHEMOTH kicked off on July 12 in Bemidji, Minnesota and will run through August 20 in Phoenix, Arizona.

LAMB OF GOD's latest release was an EP called "The Duke", which came out last November via Epic. The EP's title track, which was recorded during the sessions for "VII: Sturm Und Drang", was inspired by the plight of a LAMB OF GOD fan named Wayne Ford, who was diagnosed with leukemia in 2010 and died five years later at the age of 33.