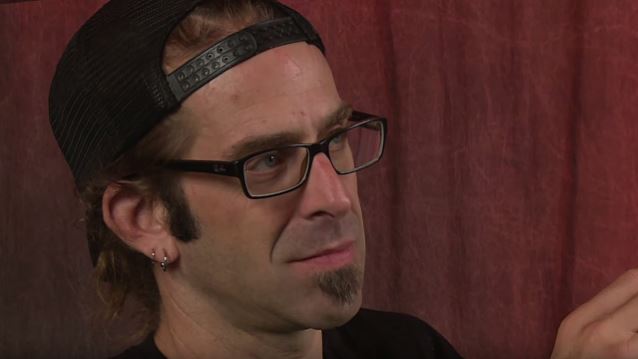 LAMB OF GOD singer Randy Blythe has slammed Republican presidential hopeful Donald Trump, saying that the real estate magnate and former reality TV star "has no clue what the average working person goes through in order to pay their bills."

Asked about the recent polls which show Trump having a commanding led over other candidates in the GOP presidential primary field, Blythe told the "Metal Shop" radio show at the August 23 99.9 KISW Pain In The Grass event in Auburn, Washington (hear audio below): "Fuck that dude!"

He continued: "All right, look. I've been in LAMB OF GOD twenty years, right? I've had a job since I was 14. For ten of the twenty years when I was in LAMB OF GOD, I was a roofer and a restaurant worker at the same time; I didn't hatch out of a rock-star egg.

"Donald Trump does not know what the common man does. He has no clue what the average working person goes through in order to pay their bills. He does not give a fuck about you; he gives a fuck about protecting big business and the lobbies. You know what I mean? So fuck that guy, and fuck his hair. He has no need to be the president of the United States. Just 'cause you're rich doesn't mean you should be president of the United States."

Blythe went on to say: "Let's take away the campaign funding, right? Let's take it all out. The Internet is free, okay? Why don't you speak about real issues. Take away the money. You know what I mean? They don't need a bazillion dollars to run a presidential campaign; I'm sorry, it's just not true. Go to YouTube, you know?

"Not just the presidency, but our Congress has been a disgrace. Bipartisan politics, fighting over party lines. Why don't they care about the American people instead of whether you're a Democrat or a Republican. You know what I mean? Let's deal with some issues."

"Metal Shop", hosted by Kevin and Ian, airs every Saturday night on 99.9 FM KISW in Seattle. It can be heard at www.kisw.com.

Blythe's memoir, "Dark Days: A Memoir" was released on July 14 via Da Capo Press. Random House purchased the foreign rights to the book and is acting as publisher in the U.K., Australia, New Zealand, and South Africa.