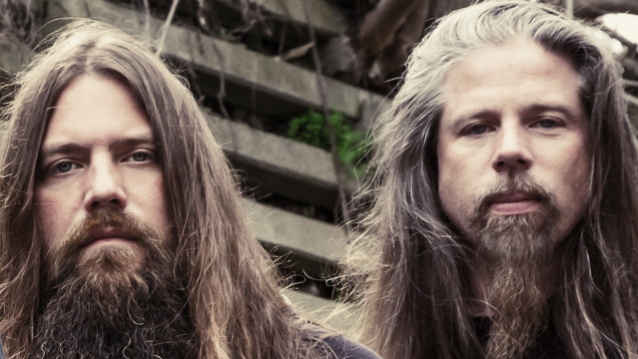 LAMB OF GOD guitarist Mark Morton spoke to the "Dabghanistan" podcast about the overwhelmingly positive response to the band's latest, self-titled album. Released on June 19 via Epic Records in the U.S. and Nuclear Blast Records in Europe, the follow-up to 2015's "VII: Sturm Und Drang" marks the band's first recordings with Art Cruz, who joined LOG last year as the replacement for the group's founding drummer, Chris Adler.

"We've been through a lot of challenges and a lot of ups and downs and a lot of difficult experiences over the last 10 years particularly, as individuals, as a band, as an organization, all that stuff," Mark said. "So losing Chris as a bandmember was not nonchalant, it wasn't 'matter of fact,' it wasn't easy for anybody involved. It wasn't a frivolous decision on anybody's part, the way it all played out. So it was real heavy — it was a heavy thing. That's Willie's [Adler, guitar] blood brother, and we were all a family — and we still are, as far as I'm concerned. I've been friends with Chris since I was 17; we used to smoke weed in his room and listen to DANZIG and play guitar… That wasn't an easy situation. So to find ourselves now having spent a year and a half on the road, largely with SLAYER, and fine-tuning with Art and getting him worked in and kind of getting in a groove as band and then being able to take that groove and put it in the studio and write these really special songs together, it was kind of a monumental moment for us. It felt like we could breathe again after all that stuff, and it was fun, and we were happy. At the end of the day, there is a human component to these records, and so the vibe translates, and it wasn't an anxious vibe, it wasn't a vibe of in-fighting, it wasn't a vibe of egos or people fighting for some kind of position or fighting to get their song on the album or whatever — it was none of that stuff. It was a real collaborative team effort, and I think that vibe is part of what the energy is that people are reacting to."

Earlier in the month, Morton told American Songwriter that "the songwriting process hasn't changed at all" since Chris's departure from LAMB OF GOD. "We have a different drummer, and there are differences for sure," he said. "Chris was a phenomenal talent, and he's a great drummer, and we made a lot of amazing music together. But Art is also a phenomenal talent and a great drummer. He's more feel-oriented. He's a little less robotic, and I don't mean that as a dig. I don't want to compare them too much. They're just two different drummers. But Art is a real feel, finesse player. I think the prime example I can give is live with Chris we used to play everything to a click. There was a click in our ear and that was a machine that kept timing consistent and the same every night. Within a week of playing with Art live, we were off the click. We were just playing the songs together instead of playing them at the same time. And I think that really made its way into our creative process as well."