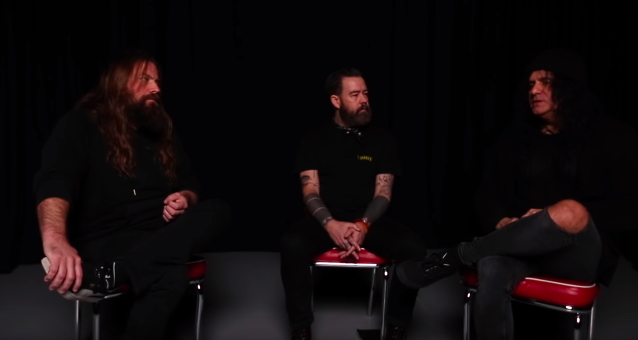 LAMB OF GOD and KREATOR will team up this spring to launch for a tour across Europe that also features Dallas thrashers POWER TRIP. In celebration of the tour, the bands will be releasing a series of trailers featuring BBC Radio 1 "Rock Show" host Daniel P. Carter chatting to LAMB OF GOD's Mark Morton and KREATOR's Mille Petrozza about their careers, the metal scene, touring and much more. In the first instalment, the guys talk about how the bands on the bill are unified through thrash. Watch below.

The "State Of Unrest" tour is set to kick off on March 27 in Stockholm, Sweden at the Fryshuset Arenan and will run until April 25, when it will wrap up in London at the O2 Academy Brixton.

LAMB OF GOD frontman Randy Blythe had this to say: "It's always a blast when you tour with someone for the first time, so we're looking forward to hitting the road with KREATOR, as well as getting some more hang time with our maniac pals in POWER TRIP. See ya in March and April!"

Petrozza added: "Hordes of Europe! It is my pleasure to introduce the 'State Of Unrest' tour. For too long, European and American metal has been divided and now it is time for unity! We are excited to be playing our only European shows of 2020 with the mighty LAMB OF GOD and support from one of my favorite new thrash bands, POWER TRIP. It's going to be a wild night of metal celebration — DO NOT MISS OUT!"

LAMB OF GOD's new, self-titled album will be released on May 8 via Epic Records in the U.S. and Nuclear Blast Records in Europe. The follow-up to "VII: Sturm Und Drang" marks LAMB OF GOD's first recordings with Art Cruz, who joined the band last July as the replacement for the group's founding drummer, Chris Adler.

Last September, KREATOR announced the addition of new bass player Frédéric Leclercq to the group's ranks. Before joining KREATOR, Leclercq rose to fame with U.K.-based extreme power metallers DRAGONFORCE for whom he handled bass duties from 2005 until last August. 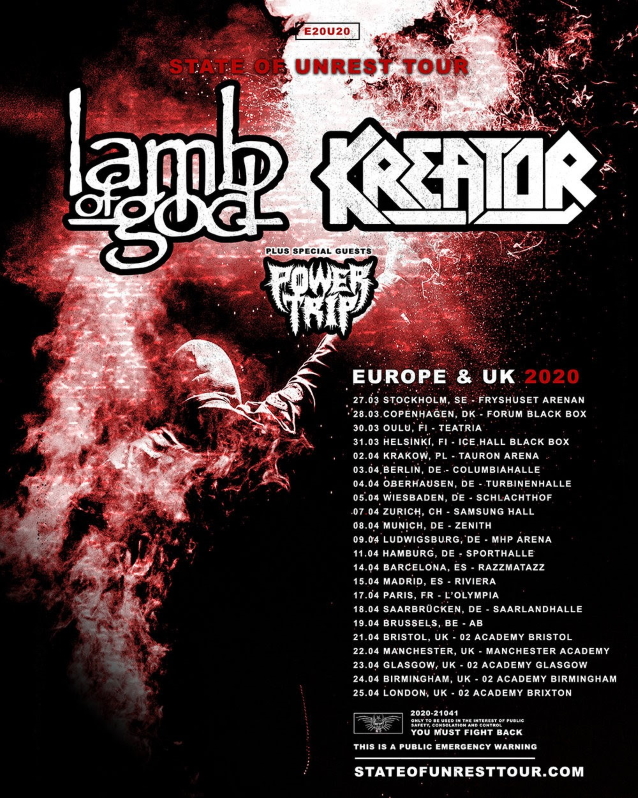