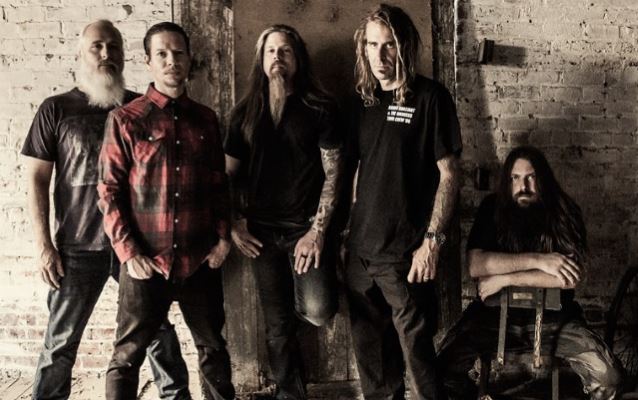 LAMB OF GOD bassist John Campbell told The Salt Lake Tribune that he felt trepidation the first time he heard the title track of last year's "The Duke" EP. The song marked only the second time in the band's history that frontman Randy Blythe used "clean vocals" — actual singing rather than growling or screaming.

"They played it back for me and said, 'Hey, I just wanna tell you something — Randy's singing on this.' And my heart dropped — I've heard him singing on the bus, just goofing off, and it's not good! But obviously, that's just him joking around," he said. "So my heart sank, I was a little nervous, and then the track came on and I was completely blown away. He completely nailed it and effectively used that in his palette for doing vocals."

When asked if more LAMB OF GOD songs down the road might also feature clean vocals, Campbell replied: "There is no telling, but I would imagine yes, probably."

The bassist acknowledged that some LAMB OF GOD fans "still have a hard time with [it]. But we're always trying to evolve and come up with new ways to present heavy music," Campbell said. "Not that it gets boring, but, you know, we don't want to go out there and play the same songs every night, or play the same set and have every song be exactly the same. It's nice to have some different emotions, some different dynamics to the set."

Blythe made his LAMB OF GOD "cleaning singing" debut on "Overlord", a track that appeared on the band's 2015 album "VII: Sturm Und Drang".

"I figure we're about eight records deep at this point so if I wanna try my hand at some clean singing, I can," Blythe said of "Overlord" prior to the record's release. "There are a lot of people that are gonna be mad about it, but fuck them."

Randy told VH1 in a 2015 interview that recording "Overlord" was "the most fun I've had in the studio in a long time. Because, dude, sitting there screaming for four to six hours a day, that shit hurts your head," he said.