MTV's Headbanger's Blog has posted several preview clips from LAMB OF GOD's forthcoming two-DVD set, "Walk With Me In Hell" (read Scott Alisoglu's review of the DVD at this location). Check them out below. (Note: Video stream may not be available to some non-U.S. residents.)

LAMB OF GOD will world-premier the full-length feature from "Walk With Me In Hell" at Chelsea Cinemas in New York City on June 30 at 7:00 p.m., with the full band in attendance. Fans can get their ticket to the premiere by pre-ordering the special double DVD bundle while supplies last.

Due in Europe through Roadrunner on June 30 and in North America via Epic on July 1, "Walk With Me In Hell" features over five hours of incredible, all-access footage. Disc 1 contains the highly anticipated feature documentary "Walk With Me In Hell" and multiple live performance extras from across the globe on the "Sacrament" world tour. The documentary chronicles every detail in the lives of LAMB OF GOD as they completed recording and toured around the world nearly three times over in support of the highly praised 2006 album "Sacrament". Disc 2 includes an additional full-length "Making of Sacrament" feature plus LAMB OF GOD's entire, uncut, brutal performance at the Download festival 2007, where they performed in front of over 72,000 fans. Extras include deleted scenes, live performance videos for various tour stops, the official music video for "Redneck", and a "Making of Redneck" documentary.

"We're on stage for 90 minutes a day," says drummer Chris Adler. "People want to know what's going on for the other 22 hours. It's not always limousines and champagne! 'Killadelphia' [LOG's previous platinum-certified DVD] surprised a lot of people and proved that we refuse to censor or hold anything back. True to the high standard that we hold ourselves to, 'Walk With Me In Hell' is unlike any music DVD I've ever seen. This is an entire new level of documentary taking you on an intense, worldwide journey with us."

"Walk With Me In Hell" features all-access footage from the bus to the stage and everything in between, and like the bands unrelenting music, never lets up.

"'Walk With Me In Hell' is a very proud moment for us as a band. It's hard to comprehend the pain and glory when you're in the middle of it, but looking back over the past two years we can begin to understand how huge this record and touring cycle was," says Adler. "It shows the blood shed and what it takes to not only hold our own, but succeed in the face of every obstacle in front of us. We have never offered less than our best, our fans expect and deserve it, and this DVD will serve as a landmark for all that follow."

"Walk With Me In Hell" was directed by Doug Spangenberg, who has also directed the platinum-awarded "Killadelphia" DVD, plus LAMB OF GOD's first DVD, "Terror and Hubris". 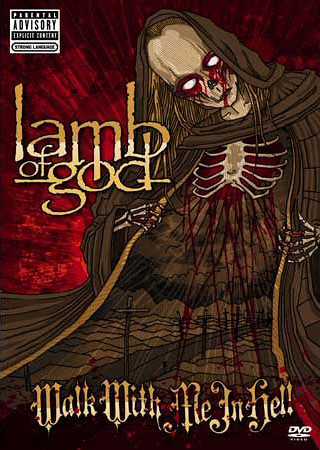