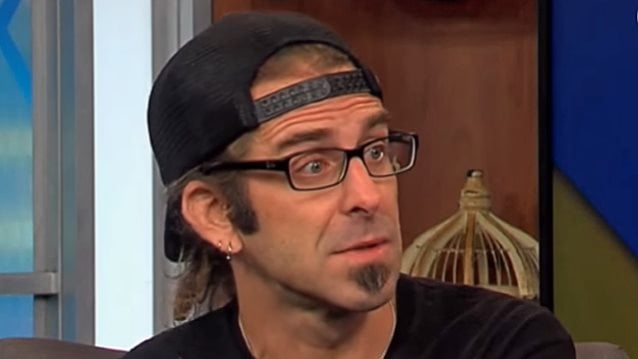 In a brand new interview with OC Weekly, LAMB OF GOD singer Randy Blythe was asked if he feels optimistic or pessimistic about the current state of the world and the looming presidential election. He responded: "The election is looking pretty grim. Everything is a mess. From the train wreck that was the Republican party's nomination process… The establishment doesn't like who the nominee is. And it is pretty much the same with the Democrats; Hillary [Clinton] is having a hard time gaining traction over young people."

He continued: "There was this obituary printed recently in the Richmond-area newspapers it went viral, but it said that a woman who died faced the prospect of voting for [Donald] Trump or Clinton, and chose to instead pass on and be with her Lord. I feel that way sometimes, I understand where that lady was coming from."

Blythe added: "This election has changed the way things are going to run. There is not a lot of statesmanship coming out of anyone, particularly the Trump side. Anyone who communicates best in 140 characters or less is not someone I want running my country. It's more like a professional wrestling match, not a presidential election.

"So far, I am not impressed with either though, Clinton or Trump. As far as the world goes, I swing widely from day to day and even sometimes minute to minute. Sometimes I think this is the best thing in the world; others I think we're all going to Hell in a hand basket."

At the end of last year, Blythe made it clear that he was not impressed with Republican presidential hopeful Donald Trump, saying that he would "leave America" if the the real estate magnate and former reality TV star becomes President Barack Obama's successor. He told Metal Insider: "I think [Trump] is going to burn himself out. I think he's going to say something so overarchingly stupid that people are finally going to be unable to accept what he's saying anymore. But I almost think he's a purposeful clown, a tool."

He continued: "I don't know if he really wants to be President. He might just be a foil for the Republican party to say, 'We've gotta be tough right now in our international relations policy, but not with this guy,' so they'll get someone who looks more moderate into office. They'll say, 'We still need to be strong, hawkish right now, but no, not Donald Trump.' I mean, it's ludicrous the things that he says. He's making shit up."

Blythe added: "I'm trying to read between the lines here and see if that's what's going on. If they're in a back room somewhere and Donald Trump is saying, [adopts Trump voice]: 'I'm gonna say that we should pull a Nazi Germany maneuver and make all Muslims wear a yellow crescent moon on their arm,' like the Gestapo did with the Jews in Nazi Germany.

"He could just be a clown. If he is the president, though, I am leaving America 'till he's gone."

Back in August 2015, Blythe told the "Metal Shop" radio show about Trump: "Donald Trump does not know what the common man does. He has no clue what the average working person goes through in order to pay their bills. He does not give a fuck about you; he gives a fuck about protecting big business and the lobbies. You know what I mean? So fuck that guy, and fuck his hair. He has no need to be the president of the United States. Just 'cause you're rich doesn't mean you should be president of the United States."

Blythe went on to say: "Let's take away the campaign funding, right? Let's take it all out. The Internet is free, okay? Why don't you speak about real issues. Take away the money. You know what I mean? They don't need a bazillion dollars to run a presidential campaign; I'm sorry, it's just not true. Go to YouTube, you know?

"Not just the presidency, but our Congress has been a disgrace. Bipartisan politics, fighting over party lines. Why don't they care about the American people instead of whether you're a Democrat or a Republican. You know what I mean? Let's deal with some issues."