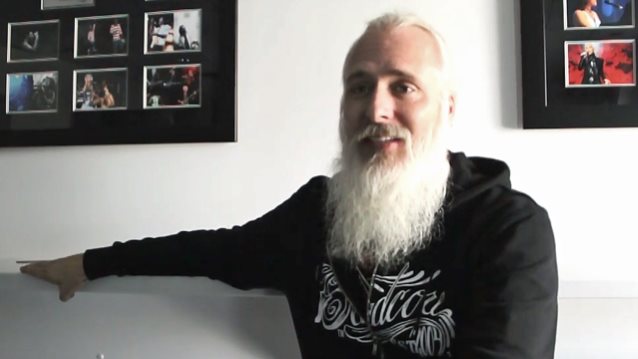 Linda of Peace FM recently conducted an interview with LAMB OF GOD bassist John Campbell. You can listen to the full chat using the SoundCloud widget below. A few excerpts follow (transcribed by BLABBERMOUTH.NET).

On how the band's sound has evolved since their 1994 formation (as BURN THE PRIEST):

John: "We've always tried to push ourselves to write songs that are just always a little bit out of our reach skill-wise and I think that has helped us become better musicians, better writers, better performers over the years. If you can listen to our records chronologically, you can hear the performances have gotten better, but also the production values go up with every record. I think that's probably how I would describe our evolution."

On his earliest musical influences:

John: "I grew up in the Washington D.C. suburbs and there was a scene that came out of there called 'D.C. hardcore', which was basically just a punk rock movement that went on in D.C. in the '80s and '90s. I was listening to that pretty exclusively. When I got into college, [LAMB OF GOD drummer] Chris Adler pulled me into his dorm room to play [METALLICA's] '…And Justice For All' incredibly loud through his bass amp. That was my introduction to good metal."

On what he attributes the band's lineup stability to:

John: "We've managed to see some successes, which doesn't hurt. We're very driven and very passionate about what we do. We have been lucky enough to continue doing this and get better at doing it over the years. I think we all respect each other musically and really appreciate each other and what we can bring to the table when it comes time to play music."

On the band's recent North American summer tour with SLAYER and BEHEMOTH:

John: "This tour has been great. The package is selling really well. I think this is the best heavy music package to be touring the continent this summer. Everyone on the tour, for the most part, has known each other for years. Everyone is a professional and knows what they're doing. It's incredibly smooth running, everyone knows what's expected and everyone is here to make it happen."

On how he thinks the genre of heavy metal has changed since the band's early days:

On his comment from the band's 2008 "Walk With Me In Hell" DVD that "LAMB OF GOD is a punk band that plays heavy metal":

John: "I think punk music is more about the delivery and the passion as opposed to technical expertise. I said that facetiously because none of us are trained on our instruments; we're just figuring it out on our own. It's a very energetic performance. It's about emoting."

On what's next for LAMB OF GOD:

John: "There may be another leg of this tour cycle. We haven't decided whether or not we're going to make that happen. This may be the end of this tour cycle and if that's the case, we'll take some time off and then come together and start working on another record."

LAMB OF GOD's tour with SLAYER and BEHEMOTH kicked off on July 12 in Bemidji, Minnesota and wrapped up August 20 in Phoenix, Arizona.

LAMB OF GOD vocalist Randy Blythe recently told the "Sixx Sense" radio show that it will be "time to take a break for real" after the completion of LAMB OF GOD's current touring cycle and "concentrate more on writing and being at home with the family."