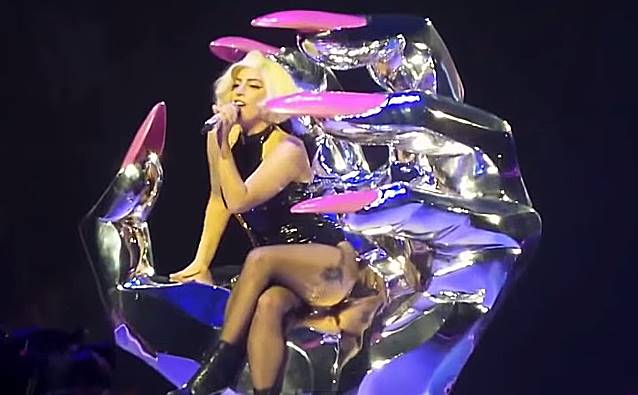 According to Mediaite, pop superstar Lady Gaga "mistakenly" posted a photo of the crowd from METALLICA's concert at Quebec, Canada's Festival D'été from 2011 claiming the picture depicted the audience that attended her July 4 performance at the same festival and venue.

Lady Gaga's appearance at Festival D'été reportedly drew around 90,000 people, roughly 40,000 less than the 130,000 attendees that showed up for METALLICA's gig at the same event three years earlier.

On Saturday, Lady Gaga, or whoever manages her social media accounts, posted a picture on Instagram of what was supposed to show the huge crowd of people that were present for her outdoor concert in Quebec. "Those little dots are fans, and that's our stage and lights beaming from the center," the accompanying caption read. "Unreal 90,000 ppl showed up! What a magical night #artraveQuebec"

After various blogs pointed out the mistake, the singer quickly corrected the error by taking to Twitter and posting actual photos from her show, insisting that she "was not trying to fool anyone." Inexplicably, she then used the opportunity to take a cheap shot at her rival Madonna, who famously criticized her in 2012 for the similarities between Gaga's track "Born This Way" and Madonna's own hit "Express Yourself". "Maybe the Madonna fans on your site can use a microscope to count the fans," Gaga tweeted in response to the celebrity gossip site Oh No They Didn't.

@ThePopZone you can post the real one, was not trying to fool anyone. I love my fans and am celebrating. pic.twitter.com/Wy9Ts3HRni

@ohnotheydidnt here's a proper pic. Maybe the Madonna fans on your site can use a microscope to count the fans pic.twitter.com/y9BWdn2et5