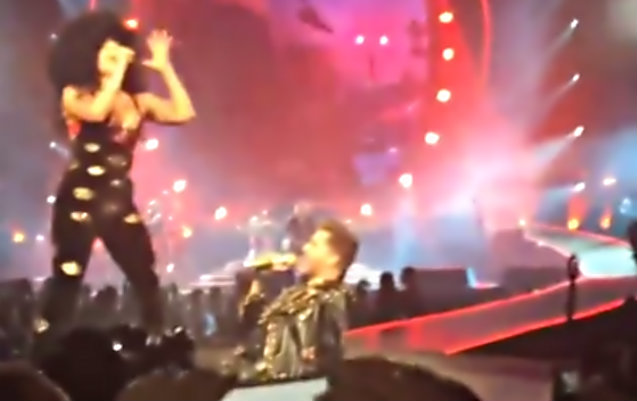 According to The Sydney Morning Herald, Lady Gaga appeared on stage wearing a black curly wig, a revealing bejewelled black jumpsuit and lethal-looking stilettos and sang a rendition of the QUEEN classic "Another One Bites The Dust". Check out fan-filmed video footage below.

Gaga didn't stick around long enough to sing QUEEN's 1984 hit "Radio Gaga", the song that inspired her stage name. However, she did watch from the crowd — and when Lambert sang "Radio Gaga", he had the auditorium lights switched on and sang the chorus to her.

Gaga co-wrote the track "Fever", which appeared on Lambert's debut album, "For Your Entertainment". In addition, QUEEN's Brian May played guitar on her single "Yoü and I", which sampled QUEEN's "We Will Rock You".