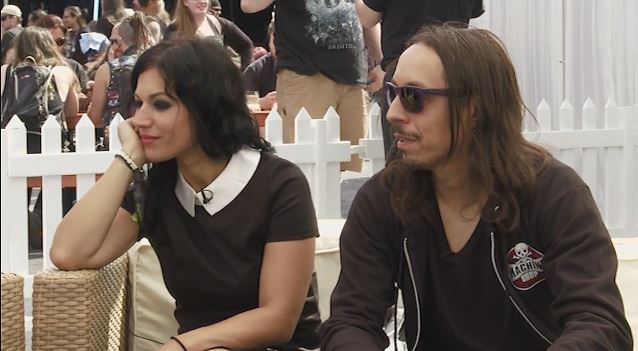 Daniel P. Carter of Scuzz TV conducted an interview with vocalists Cristina Scabbia and Andrea Ferro of Italian heavy rockers LACUNA COIL at this year's edition of the Bloodstock Open Air festival, which was held August 7-10 at Catton Hall, Walton-On-Trent, West Midlands, United Kingdom. You can now watch the chat below.

Asked how the material from LACUNA COIL's latest studio album, "Broken Crown Halo", has been received by the band's fans, Cristina said: "It's been received very well. I mean, besides the usual charts, blah blah blah, that was good. Either old-school fans and fans of the new era, let's say so, are very happy with it, because it's a heavy album, but it's also melodic. It's modern, but it keeps a lot of the old roots of LACUNA COIL. There are a lot of reminiscences from the very first records, for example. And it seems like they like it. So we're happy about that, because we don't write specifically for fans or the press, we don't really think about how the reaction will be, because there is no recipe for success or anything like that. We just want to make ourselves happy and to show that we are honest with our music. And, apparently, we're right, because it always works. They can feel that we are really feeling every record that we put out."

Added Ferro: "It's important for us, being around since a few years now, to still be fresh, in a way. Of course you know what you're gonna get with a LACUNA COIL record — there are certain elements that we can't really change, because it's our formula, in a way — but we like to try to explore as much as we can within the boundaries of our genre and keep it fresh, first for ourselves, because we're not really able to just repeat exactly the same; we try to always incorporate a little bit of elements that made our music interesting also for us. We're not really able to just do it because it worked in the past, so we just redo it the same."