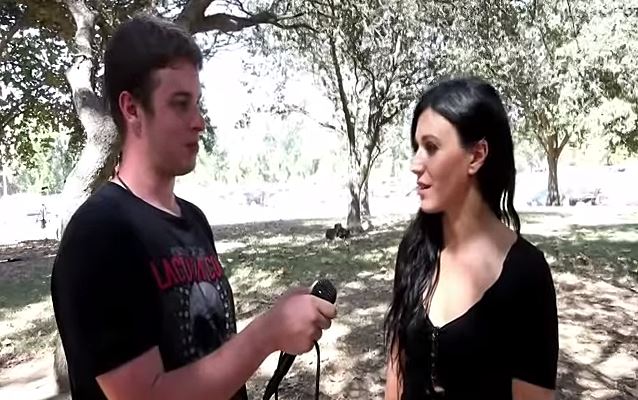 On September 14, Michael Mullenix of All Things Metal conducted an interview with vocalist Cristina Scabbia of Italian heavy rockers LACUNA COIL at the Aftershock festival in Sacramento, California. You can now watch the chat below. A couple of excerpts follow (transcribed by BLABBERMOUTH.NET).

On how the sound of LACUNA COIL's latest studio album, "Broken Crown Halo", compares to the band's previous efforts:

Cristina: "Honestly, it's a step ahead, and it's a step back. Because there are a lot of reminiscences from the beginning of LACUNA COIL, in terms of sound. There are some songs that are really reminding me of the old sound of LACUNA COIL, the sound we had in the beginning, but there are also a lot of new influences, because we are usually getting inspired by new surroundings or experiences we're going through that we put in the lyrics. So I believe that this album is the best mixture we've ever had in terms of the old LACUNA COIL style and new LACUNA COIL style."

On whether there is any one song on "Broken Crown Halo" that she is particularly amped to play live:

Cristina: "All of the songs that we are playing from the new record are special to me, and they are fresh to my ears, so I enjoy to play them, and for different reasons. But I would say probably the one that stands out a little bit more than the others is 'Nothing Stands In Our Way', and I can tell, because the crowds are reacting in a very energetic and felt way. Because it's sort of an anthem. I mean, we wrote it because it [summarizes] the story of LACUNA COIL — all these years together, going through ups and downs, but still strong. We won't stop for anything. We're really confident, and we really go for what we want. So I believe that this song connects very much with the crowds. It's sort of like our message to whomever is out there. It's just, like, if you have a dream, go for it, because we are the perfect example that if you go for it, you can get there."