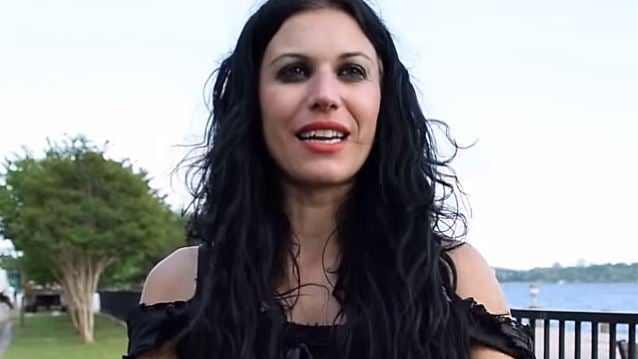 The original video for this image can be found here.

In a brand new interview with Revolver magazine, vocalist Cristina Scabbia of Italian heavy rockers LACUNA COIL was asked if it was difficult to end her romantic relationship with the band's bassist Marco Coti Zelati knowing that they had to continue working together in the group.

"It wasn't always easy," she admitted, "but we're adults. And I never wrote mean lyrics about hlm or anything. [Laughs] There was never any need to be mean. Because nobody did anything wrong. Things just changed and evolved. And now we're best friends. We still love each other, but it's on a completely different level."

Scabbia also spoke about her ten-year relationship with SLIPKNOT guitarist Jim Root and the difficulty of maintaining a long-distance relationship while spending so much time on tour. (Root lives in Florida while Cristina resides in Italy.)

"Well, my lifestyle is challenging already," Cristina explained. "Because I travel a lot and I work very hard. So you have to learn to live your life in a different way, but in a way that works for you. So for me to even think about a normal relationship would be something weird. [Laughs]"

In a recent Facebook posting, Cristina described herself as "taken, extremely monogamous and surprisingly... with good moral values."

Asked what her best and worst personal characteristics are, Cristina told About Heavy Metal: "I have a lot of them for the worst. I get stressed really easily, especially on the [tour] bus. I'm always complaining because [the other guys in the band are] not keeping it clean. I'm the only woman [on tour], and it's my home and needs to be clean. But, at the same time, in a few seconds I calm down and it's good."