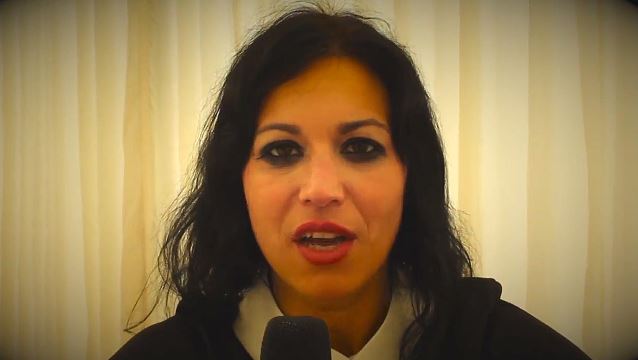 Jägermeister U.K. conducted an interview with vocalist Cristina Scabbia of Italian heavy rockers LACUNA COIL at this year's edition of the Bloodstock Open Air festival, which is being held August 7-10 at Catton Hall, Walton-On-Trent, West Midlands, United Kingdom. You can now watch the chat below.

Asked how she got her start as a vocalist, Scabbia said: "I always loved to sing. As far as I can remember, I've always been singing, like in the family, like recording stuff. Even when I was a little girl, I have tapes of when I was four and I was just humming everything I could. But I didn't want to be in the spot, so I was not the kid that wanted to be the center of attention, with all the parents, like, 'Hey, look at me.' I just loved to sing. So if I think about all my life, it's like life put me in the musical path in the way that friends asked me to sing for them, because they had projects, because they knew that I loved to sing. Or DJs were, like, 'Hey, why don't you come to the studio and record something and we can pick some parts up and we can play with them?' And then I met the guys in LACUNA COIL and they asked me to be in the band. And I was enjoying it, I was enjoying it."

She continued: "I don't really need to be in the spot, I don't really care about it, but I love to be in the band, I love to be in a musical project. And that's how it happened. But I didn't have the dream of, 'Oh, I'm gonna be a rock star one day.' I didn't really think about that. I just started to enjoy it along the way. And I'm really happy because now it's my life, I love it, I couldn't think my life to be different than that.

"I was not a shy kid. I loved to interact with people, I loved to play with other kids, and when I became, like, an adolescent, I was loving to go out, and I wasn't shy. But to perform in front of people is completely different. Even now, if I have to perform in front of a hundred thousand people, I have no problem, but if friends ask me, 'Hey, why don't you sing us this song?' I [will be] like, 'No, I don't want to.' It's kind of weird, but I heard that it happens to a lot of people, a lot of other artists. I do remember that the first gigs that we played, I was literally hiding behind the microphone stands 'cause I didn't really want to be in the spot. Now I'm more comfortable with it, but I'm still, like, 'OK, I've gotta do it.' I mean, I love to interact with people, but I really wish we could do it in front of a coffee and not from a stage."