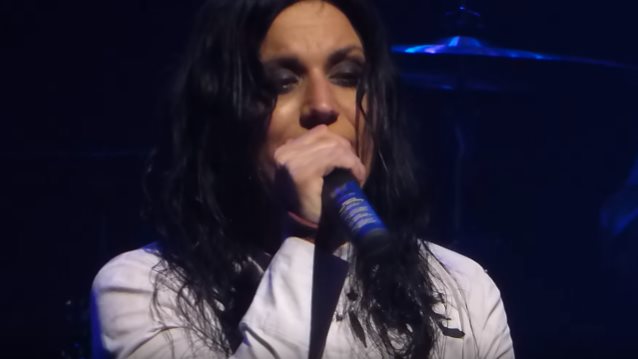 On June 3, Metaleater's Tony Antunovich conducted an interview with singer Cristina Scabbia of Italian heavy rockers LACUNA COIL. You can now listen to the chat in the SoundCloud widget below. A couple of excerpts follow (transcribed by BLABBERMOUTH.NET).

On the difficulties of making a living as a recording and touring artist in 2016 compared to how it was when LACUNA COIL first started out:

"I think that we are blessed because we started our career in a period where, let's say, the money in the business was still there. So we could make our records, we could promote ourselves and touring and touring, we had a chance to build our bases of fans that, thank goodness, are still very loyal to us and love us as much as we love them. But it is definitely way harder. There is less money. A lot more bands are touring at the same time, because, of course, with the illegal downloads going on, you sell less copies of your CDs. So, of course, you have to pay your bills and you have to get the money in other ways, which is touring. And that's why a lot of bands are touring at the same time. It's difficult for kids to decide which shows they're gonna go to see, the records they're gonna buy… It is different, and it's definitely, definitely more difficult."

On how she prepares for going on the road for several weeks at a time:

"I don't prepare at all. The thing that hurts me the most is to be far from the loved ones. But if I have to consider the rest, I absolutely love it. I love to travel, I love to share a bus with my friends, I love the people I work with. I have no problems with that. And plus, I don't do the countdown, which I think is one of the secrets to deal with the touring. I mean, I know some people that, from the beginning of the tour, start with a countdown to go back home, and I think that's the worst way to approach a tour. You don't even have to think about dates; you don't have to think about it. Just go for it, have fun, try to play a good show, and try to find something for yourself to kind of kill time. Just walk around the city, discover new things. Talk with the fans. Do something. But, again, it's not for everyone. All my girlfriends are, like, 'I don't know how you can do it, 'cause I wouldn't last one day on a tour bus.' And it's, like, well, because that's not what life chose for you to do. I love every single moment. I couldn't myself in an office, sitting down in front of a computer for eight hours a day, 'cause that's not me. But I can understand if someone else wants to do it, because it's what they want. For some people, it's just fine, because you go back home, you have your family, you have your bed, your shower, and for some people, it's okay. I need to travel. I need to do stuff. I definitely need a dynamic job, and this is perfect, because I get to do, as a job, my biggest passion."

LACUNA COIL's new album, "Delirium", entered The Billboard 200 chart at position No. 33 with first-week sales of just over 13,000 units — nearly all from pure album sales. The set follows the No. 27-peaking "Broken Crown Halo", which also opened with around 13,000 copies back in 2014.