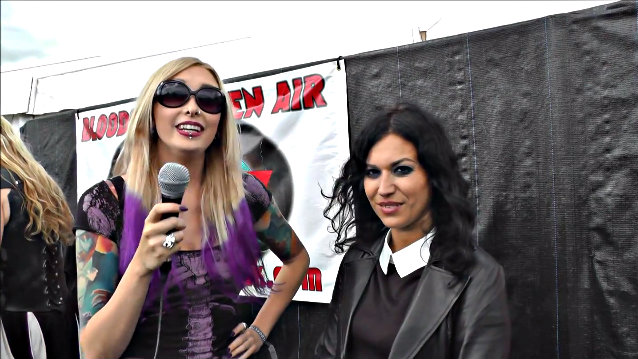 Hayley Leggs of TotalRock Radio conducted an interview with vocalist Cristina Scabbia of Italian heavy rockers LACUNA COIL at this year's edition of the Bloodstock Open Air festival, which was held August 7-10 at Catton Hall, Walton-On-Trent, West Midlands, United Kingdom. You can now watch the chat below.

Asked if she is satisfied with how "Broken Crown Halo" has been received by the fans and music critics alike, Scabbia told GetYourRockOut: "I'm very happy. Honestly, when we put out records, we don't really think about the response we could have or what people could think about it, not because we don't care about the music press or the fans at all, because we love our fans and the press, but it was more like a self -therapy. It's like writing a diary and translating it with words and music for us. So if people like it, good. If people don't like it, I mean, it's just like, we've been honest and we put out something that we think is honest from our side. We could have repeated ourselves over and over with older albums, just because people like them and just like, 'Oh, this is gonna be good, because it's gonna be sounding kind of like that.' But we're just not like that. So I'm totally happy that people [are] liking it. I think it's a great combination between our roots and the new influences, because you want to evolve as well."