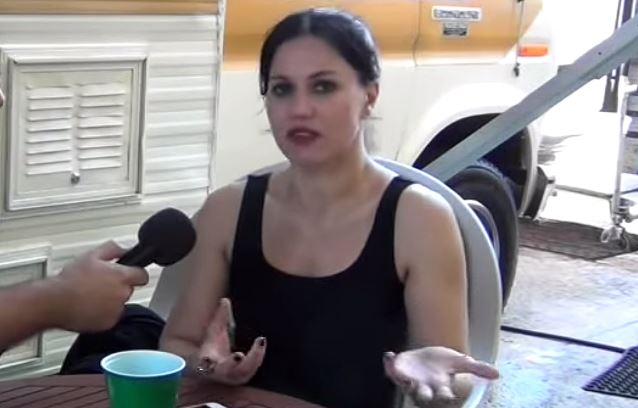 Vocalist Cristina Scabbia of Italian heavy rockers LACUNA COIL was interviewed by Lechon Atomico of MetalPR.com prior to the band's February 7 concert in Guaynabo, Puerto Rico. You can now watch the chat below. A couple of excerpts follow (transcribed by BLABBERMOUTH.NET).

On whether there are any plans for LACUNA COIL to release another DVD:

Cristina: "No, there is nothing on the table right now, because we just feel that a DVD of a live show… I mean, everyone did it, so it's not very interesting anymore. Also, because the atmosphere of [watching] a live [DVD] will never be the same [as] attending a real show. So I would love to make a DVD that shows more of the private side of an artist — whatever happens behind the scenes, or the preparation… more of a reality thing. But, of course, it takes a budget and preparation. But we're not really talking about it right now. We're gonna be focusing on the new record once we go back home. That's the main thing to do now."

On the direction of LACUNA COIL's new material:

Cristina: "We don't know yet. Because Marco [Coti Zelati], our bass player, who's also the main songwriter, wrote a lot of music already, and we just started to listen to it. And, of course, we will come up with suggestions and contributions, and we will select the songs that we like the most, or that we feel the most — especially Andrea [Ferro, vocals] and I, [since] we are responsible for the vocal lines and the melodies and the lyrics. So we will have to feel the music as well. So this is something that we will see as soon as we go back home [and start working on the material]."

On whether there will be a change in LACUNA COIL's musical direction because of the recent departures of guitarist Cristiano "Pizza" Migliore and drummer Cristiano 'CriZ' Mozzati:

Cristina: "There will [still] be melody, for sure, because that's part of our Italian heritage. And I like melody in songs. I like the heaviness of the songs, but I also like when you hear a song and you can remember parts of the song itself. Not just, like, straight violence in your face, but also, 'Oh, that's a good chorus. That's a good melody.' That's the way I like it, at least. So I believe that the next record might be heavier, because we have a new drummer, so he will probably be experimenting more on his side. It's the first time that we will write with Ryan [Blake Folden]. But the main composers, the main songwriters are still in the band, so I don't think it's gonna be something that worries us. I mean, we feel pretty confident that we will come up with a great record, and we can't wait to start."

Cristina: "We have other festivals coming [up], and they're still planning all the schedule. But I think that this year we will keep it relaxed, just because we wanna focus on the new album, so we wanna stay home to write it properly. 'Cause when we are on the road, we just don't have the right vibe to write stuff. You get distracted by too many things. So we just love to enjoy the life on tour when we're on tour. We like to meet fans, we just like to see how is it around the venues. We're just not the type of band that writes on the road, so we need to be home and focus on that only."