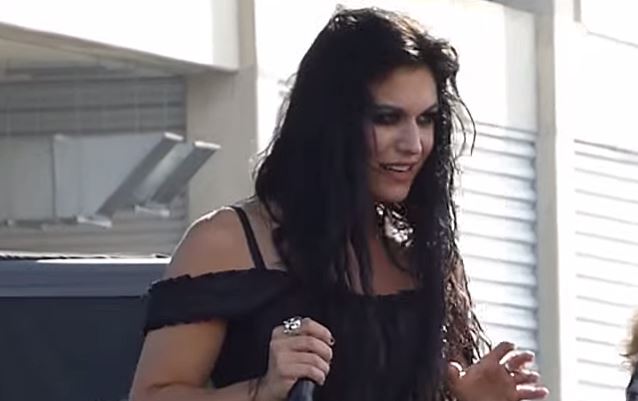 Ross Baker of Ghost Cult magazine recently conducted an interview with vocalist Cristina Scabbia of Italian heavy rockers LACUNA COIL. A couple of excerpts from the chat follow below.

On the hardships of the touring lifestyle:

Cristina: "People don't see that it is a lot of hard work to [be on tour]. Being away from our families and friends for most of the year is difficult, but this is what we do. I'm not complaining about it, because I love playing live and connecting with our fans, but it's not all glamour."

On fans' misperception of how much money bands are making by touring around the world and appearing on covers of metal magazines:

Cristina: "People think you are becoming a millionaire touring all the time, but bands have to tour now more than ever just to pay their bills!

"I posted a status on Facebook the other day looking for an outlet to buy something, and some girl wrote, 'Why don't you get someone to bring you that? You are a millionaire. You can afford it.'

"People seem to think you get on a couple of magazine covers and all of a sudden you are super rich, but it is really not the case. The fact that people seem to think things like that makes me want to post more on Facebook and Twitter and show people what our lives are really like. It is a luxury to have this job, but we also spend a lot of time working our asses off! That's a reason why I wrote a column for Revolver magazine, so I could show people what life was really like for bands."

Cristina: "We have known this was happening since December [2013], really. We sat down to discuss the tour schedule this year and they let us know it was time for them to do something different. It was readily apparent that they were not into the touring lifestyle and that's fine. There was no fight or anything like that. We are continuing on our path and they are on theirs. It did not affect the [making of the new LACUNA COIL] album ['Broken Crown Halo'] and there was still a very friendly atmosphere when we were recording the album together. Marco [Coti Zelati], our bass player, is our main songwriter anyway, so nothing much will change writing-wise."

On replacing Mozzati on tour with former THE AGONY SCENE drummer Ryan Folden:

Cristina: "He started as our drum tech and filled in for Criz when he and his partner had their baby girl. He's a great musician and a perfect guy to have on a tour bus.

"It was really important for us to have someone we felt comfortable with and who understands the touring lifestyle.

"As for the guitarist, we are carrying on with just Maus [Marco Biazzi] for now, but the response from musicians expressing interest in becoming part of our band has been phenomenal.

"As soon as we put a status online, we were inundated with emails and video auditions. We really appreciate it, but we aren't auditioning anyone right now. It's going to take some time for us to decide on what the right thing to do is. I think it's really cool with one guitar too. It gives the band a more rock vibe, which I think is really interesting."