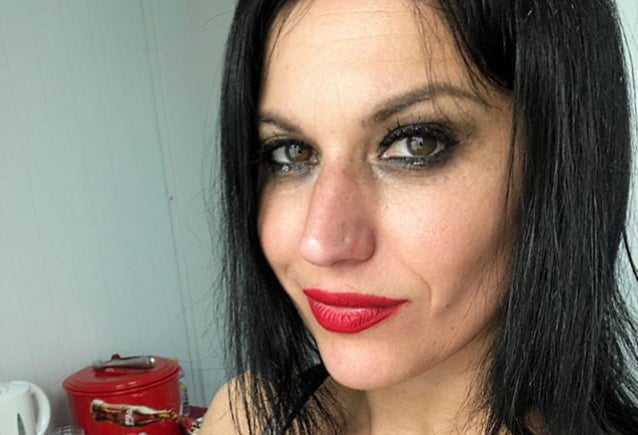 LACUNA COIL singer Cristina Scabbia recently spoke to Campus Party about how the coronavirus pandemic has affected the music industry, with pretty much every live show, and festival being canceled or postponed. She said (see video below): "It feels crazy, 'cause it has already changed the music industry, because everything stopped. There is nothing happening — gatherings, of course, are not possible, and concerts are all about gathering, are all about people getting together, sweating together, singing in each other's face. So, of course, everything stopped, no traveling allowed. We had to cancel two tours, and, of course, I know many, many friends and artists that had to do the same.

"The craziest thing is that we don't know when everything will restart again," she continued. "Because in other jobs, at least they had a word, 'Okay, you're gonna start this month,' with some security things to take care of [and] to be careful about. But for us and all the artists around the world, it's really difficult. And it's not about artists only, but there's a lot of people who work behind the scenes.

"A lot of people tend to forget this, 'cause it's not only a problem of singers and musicians, but it's also a problem for whoever builds stages, whoever is working in venues," she added. "The owners of venues have had to close down sometimes because of COVID. So it is a huge, huge problem, and the whole business has been heavily affected."

Asked if there is anything she would change about the music business if she could, Cristina said: "Well, there are some things that I would definitely change, because I think that a lot of people are underestimating the value and the importance of music in the world. We hear music all the time and so much that we got so used to it that we think it's just something happening. So a lot of people [are] not really considering the hard work that musicians, singers are doing creating music. Sometimes to be a musician is not even considered a job. So if I could change something, I would apply some more rules to protect the job of a musician and something that kind of [stresses] the importance of saying music, it's great, it's beautiful, we all want it, but it doesn't really happen all of a sudden. There is someone who creates it, there is someone who records it, there is a lot of work behind [it] and a lot of money involved. So when you do it for a living, you're spending a lot of money, because it is your life and it is your job. So I would change some regulations, especially of music online or some platforms that are not giving enough compensation to a lot of musicians."

This past July, LACUNA COIL announced "Black Anima: Live From The Apocalypse", an exclusive streaming show featuring a full performance of "Black Anima" for the very first time, including songs never performed live, plus special backstage/off-camera moments and more. The Italian heavy rockers will play a special streaming show on Friday, September 11 from the Alcatraz Club in Milan in what will certainly be a unique and once-in-a-lifetime event. After the success of the acclaimed 20th-anniversary concert "The 119 Show", the band has once again gone all out to create an outstanding and exclusive spectacle that won't disappoint fans all over the world. The show will be available to view only once, live, via streaming.

"Black Anima: Live From The Apocalypse" will be hosted on A-Live.