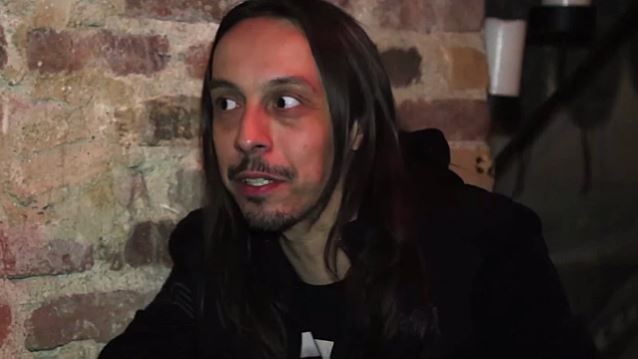 On October 12, Metal Mark of SkullsNBones.com conducted an interview with vocalist Andrea Ferro of Italian heavy rockers LACUNA COIL. You can now watch the chat below. A couple of excerpts follow (transcribed by BLABBERMOUTH.NET).

On whether there are still some things left that he would like to accomplish with LACUNA COIL:

Andrea: "You always have to have goals. Otherwise, if you don't find that special force that drives you to go on, it could be a very dangerous job, 'cause it takes away a lot of your private life. So if you don't really will to be here, that's too much of a sacrifice. So you really need to find that special fire that pushes you to write new songs and get it out there and get the people to listen to it and say, 'Okay. Now we…' For example, recently we changed some of the bandmembers, two of the bandmembers, and now we're a five-piece instead of a six-piece, and we have a new drummer. So the next record's gonna be a different approach, because we've got this very different style of drummer, which is more about the double bass and a different style. And then we will work with one guitar, so it will be very challenging to see what we can come up with on the songwriting. And it's refreshing, because I think after seven records, we kind of found our comfort zone, so maybe next record it's time to step up and do something different a little bit and shake things up. So it's still very interesting for us. And until we will see that people are still waiting to see what we can do, that's very stimulating; it makes the job still interesting, and the creativity is still there."

On LACUNA COIL's active social-media presence in terms of interacting with the band's fans:

Andrea: "We are very thankful, because they've been following us for 17 years — some people [have] really [been] there for 17 years. And then sometimes certain people have an attachment to the band which is even deeper than the band itself. The band has meant something so special, or a specific song, has meant something so deep and special in their lives that it actually kind of saved their lives; at least that's what they say. And that's mindblowing, because when you write a song, you try to express your feelings towars it, but you never even think that you could save somebody's life. So it is something beyond the control of the band itself; it's a force that has been… a legacy that has been going over every possible expectation, and deeper than we ever expected it to be — deeper than for us, sometimes. So it's a pleasure for us to talk with people. Of course you cannot talk about everything; there are certain parts of your life you don't wanna share. And it's appropriate. I think people sometimes overdo it with technology — they write on Facebook everything about their lives, and it's not necessary. So there are certain things that are cool to share, and I like to share, especially even share information about things that I like that people might like as well, and share passions and get to know better the argument or the topic because other people have knowledge about it. So that's a cool thing. When something is born from that, that's the greatest thing. When the Internet generates something that goes beyond the Internet but becomes a real thing, that's great. And I met a lot of people I did work with, or I did some creative stuff with, just through the Internet. And that's the beauty of the Internet. That's how you should use the Internet; even if sometimes we use it for bullshit. [Laughs]"

LACUNA COIL's latest album, "Broken Crown Halo", sold around 13,000 copies in the United States in its first week of release to debut at position No. 27 on The Billboard 200 chart. The CD arrived in stores on April 1 via Century Media.