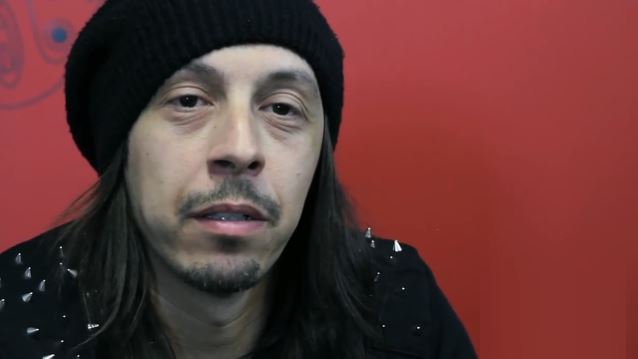 PlanetMosh conducted an interview with vocalist Andrea Ferro of Italian heavy rockers LACUNA COIL at this year's edition of the Bloodstock Open Air festival, which was held August 7-10 at Catton Hall, Walton-On-Trent, West Midlands, United Kingdom. You can now listen to the chat using the audio player below.

Asked in a recent interview with Loudwire what the "Broken Crown Halo" title means to him personally, Ferro said: "We were looking for a title that could represent a kingdom and crown, something to separate real and fake. Some things that you try to perfect and make perfect usually aren't as perfect as it seems.

"The main concept was to portray the reality of today, which is very shallow and fake. We don't want to live in a fabricated illusion; we want to accept existence even if it's sometimes in darkness. It's not always easy, but we're going to keep going and following our dreams no matter what."

Ferro also spoke about how he has evolved as a singer from the band's early days to what can be heard on "Broken Crown Halo". "Not only did I grow as a single singer, but also to work together [with Cristina Scabbia] and have a balance, it's something you learn every record and every tour," he said. "You understand more, you know yourself better. We're more natural singers, and we like to learn about our body, about our voice.

"It's really important to understand how the voice moves and works. You try to be as expressive as possible and adaptable to different kinds of songs. It's cool to learn and it's such an inspiration to be able to sing with such a talented singer as Cristina, because it's always challenging to be her counterpart. It helps me to improve and motivates me a lot to learn more every time and in every record."