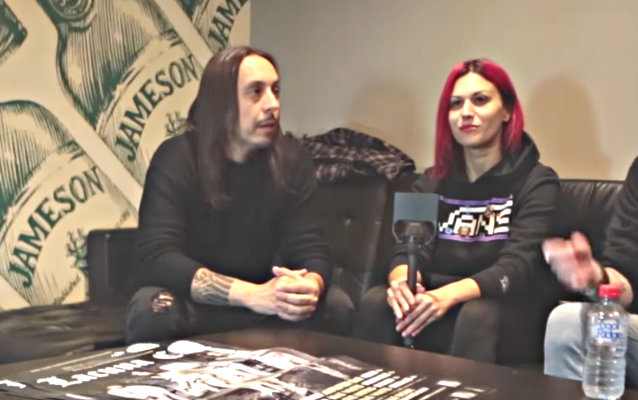 On October 13, Heavy TV conducted an interview with vocalists Cristina Scabbia and Andrea Ferro of Italian heavy rockers LACUNA COIL in Melbourne, Australia. You can now watch the chat below.

Speaking about the heavier vocal approach on LACUNA COIL's latest album, "Delirium", Andrea said: "We took some chances, because we thought it's kind of a new chapter for us, because we have a little bit of a new lineup. We have Ryan [Folden, drums]; he plays with us for a few years now — seven, eight years. He was our drum tech even before Cristiano ['CriZ' Mozzati] resigned. And so it's the first time he actually recorded an album with us and did all the touring together. And also we have a new guitar player, Diego [Cavallotti] , we are trying on this run for the album, and so far so good. So we needed to do something a little different that stimulated us as well as the fans to listen to the band again."

Added Cristina: "Even though it's nothing that we have never done before, it's something that we did in the very, very first years of our career. And we basically evolved a little bit, so now we went back to our roots a little bit more, with the growling and with the epic sounds and with the choruses."